When played: Each plant in your hand becomes 4

.
So powerful it makes you cry.
Onion Rings is a galactic legendary plant card in Plants vs. Zombies Heroes and a member of the

It does not have any traits, and its ability changes the stats of all plant fighters in the plant hero's hand to 4

when it is played.

It is based on the onion (Allium cepa), a vegetable that is the most widely cultivated species of the genus Allium, specifically the red onion; and a planet with rings, for example, Saturn.

Its name is a literal pun on "onion rings," a snack that consists of cross-sectional "rings" of onion covered in batter which are then deep-fried. However, Onion Rings has raw sliced onion rings orbiting around it instead.

Its description is a reference to how onions in real life cause eye irritation and uncontrollable tears when cut normally due to a chemical irritant known as syn-propanethial-S-oxide.

So powerful it makes you cry.

, but its ability can potentially cause a large tempo swing if it boosts enough plants. Thus, getting as many cards as possible to gain maximum value can be done with reactive play by running a control deck or drawing additional cards with ones like Flourish.

As Onion Rings turns all your plants' stats into 4

, this naturally comes with the deckbuilding restriction of limiting the power of cards with high stats such as The Great Zucchini and Kernel Corn, making them cards you should avoid.

To make the best use of the ability, cards that cost little and/or have useful abilities should be prioritized in an Onion Rings deck. Putting a lot of cheap plants in your deck causes them to become absurdly powerful when you can easily swarm, if not cripple your opponent.

The Mega-Grow class has a few cards that work decently with its ability such as Bonk Choy, Sweet Pea, Grow-Shroom, and Clique Peas due to the naturally low stats of the class. However, each other class has their share of plants that also go well with the boost:

But in the end, a good Onion Rings deck needs to balance cards that are great with the Onion Rings boost while still doing acceptably without it, with tradeoffs between weakness to aggressive strategies or having less value in the deck overall.

Onion Rings relies on a deck being built around its ability to be effective, and the cards that gain value from that are often poor for establishing control early-game. Going on the offensive will force your opponent to choose between losing boost value and taking a lot of damage. Also, keep in mind that any cards affected by Onion Rings will keep their new stats even after being Bounced, so do not attempt to do that to reset their stats.

Cards such as Regifting Zombie can potentially speed up their gameplan of gaining cards to boost, but it is often more important to fuel your aggression than to fear their later value. It will be nearly impossible to actually outvalue or even remove the buffed up swarm that Onion Rings produces, so the best course of action is to try and defeat your opponent as soon as possible. 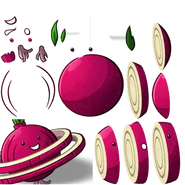 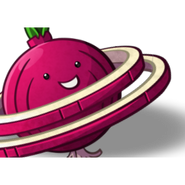 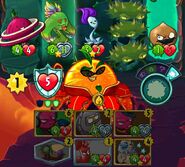 The aftermath of Onion Rings' ability 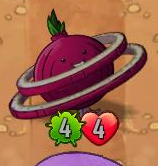 Onion Rings tinted gray due to a glitch

Fertilize being played on Onion Rings 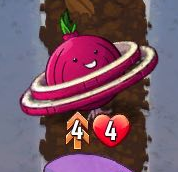 Onion Rings with the

Onion Rings with the

Two Onion Rings on a lane due to Pair Pearadise's ability

Embiggen being used on Onion Rings.