Plants vs. Zombies Wiki
Register
Don't have an account?
Sign In
Advertisement
in: China exclusive, Brain Busters, Levels without any lawn mowers,
and 8 more

Level 1 arrows allow the player to defeat zombies with three hits. These arrows replenish in sets of 12 every ten seconds once exhausted. Level 2 arrows have a bluish glow around them and will instantly defeat any zombie (excluding Gargantuars). Level 3 arrows glow gold and will fire five arrows at once, each in a different frontal direction. They are well-used as a last resort. There is only a limited number of level 2 and 3 arrows as they do not replenish automatically, and an unlimited number of Level 1 arrows which must recharge, so the player must use them wisely.

Hitting any zombie in the head will inflict a "headshot" and deal up to triple the damage of a regular shot to the zombie. Getting consecutive headshots will also reward you with a multiplier which will allow you to obtain a higher score (and upon victory more coins).

All levels give a star upon completion for the first time, and two stars for the completion of their Hard Mode variants. 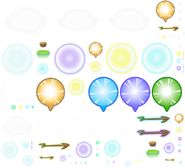