For the version in the Chinese version of Plants vs. Zombies 2, see Oak Archer

Oak Archer broke many of his neighbors' windows when he was young. He was punished by his father because of that. His diary has the words "Zombie knee: 998/10000" written on the very last page.

Oak Archer (橡木弓手; pinyin: xiàngmù gōngshǒu) was a premium plant that appeared in Plants vs. Zombies: Journey to the West. They fired arrows to hurt zombies.

For more information about this character, see Oak Archer.

Oak Archer was a store bought premium plant which could be purchased with 180 gems and couldn't be imitated.

Like Plants vs. Zombies 2, he shot arrows to attack enemies ahead of them which dealt more damage than a Peashooter. However, due to a lack of Plant Food in the game, there was a chance for him to use his Plant Food effect, firing multiple arrows into the air which hit all zombies on screen.


Oak Archer broke many of his neighbors' windows when he was young, often being punished by his father because of that. His diary has the words "Zombie knee: 998/10000" written on the very last page.

Oak Archer is best comparable to Repeater in terms of cost and usage. Oak Archer deals more damage than Repeater, but suffers a slower recharge and the inability to team up with Torchwood. Oak Archer's main advantage against Repeater is their special ability, but this attack happens at random and is thus unreliable to depend on. 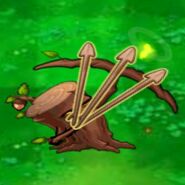 Oak Archer inside a Pumpkin

An advertisement featuring Oak Archer
Add a photo to this gallery

Retrieved from "https://plantsvszombies.fandom.com/wiki/Oak_Archer_(PvZ:_JttW)?oldid=2262425"
Community content is available under CC-BY-SA unless otherwise noted.