Notes are pieces of paper dropped and written by the zombies in Plants vs. Zombies and its sequel. Each note precedes a conveyor-belt level (the last level of a stage in Plants vs. Zombies) and alerts the player towards this fact (except for the Java version). The normal notes have bad grammar and handwriting, since an average zombie is unintelligent. However, because of his intelligence, Dr. Zomboss has excellent grammar and very neat cursive handwriting with a brush script style in his note.

In Plants vs. Zombies, the note is earned after completing the ninth level in an area. When the player picks it up, the note will disappear into some stars. The screen will then fade, and the note will be revealed to the player. If the player clicks the "Next level!" button at the bottom of the screen, the tenth level will start.

Day note (translation: Hello, we are about to launch an all-out attack on your house. Sincerely, the Zombies)

Night note (translation: Hello, we would like to visit for a midnight snack. How does ice cream and brains sound? Sincerely, the Zombies)

Pool note (translation: Hello, we heard you were having a pool party. We think that is fun. We will be right over. Sincerely, the Zombies)

Fog note (translation: Hello, this is your mother. Please come over to my house for "meatloaf." Leave your front door open and your lawn unguarded. Sincerely, Mom (not the Zombies))

Roof note, written by Dr. Zomboss (translation: Homeowner, you have failed to submit to our rightful claim. Be advised that unless you comply, we will be forced to take extreme action. Please remit your home and brains to us forthwith. Sincerely, Dr. Edgar Zomboss (signed))

The note after beating Dr. Zomboss (translation: OK, you win. No more eating brains for us. We just want to make music video with you now. Sincerely, the Zombies)

Help note in options (translation: Help for Plants and Zombies Game: When the Zombies show up, just sit there and don't do anything. You win the game when the Zombies get to your house. -this help section brought to you by the Zombies)

The note after any x-9 level. All are the same. 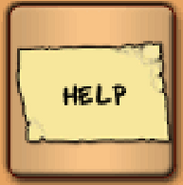 Help note as seen on Almanac.

The "Help" section of Plants vs. Zombies can be accessed from the main menu (in the iPod Touch and iPhone versions, it is accessed by the option menu and in the European Nintendo DS and DSi versions, it is known as "Hint"), and turns out to be a sloppily written note (similar to those seen at the ninth level of every stage of Adventure Mode and at the end of the last level) written by the zombies.

Help for Plants and Zombies Game

—this help section brought to you by the Zombies

However, this note is not in the PS3/Xbox360/PSVita version, as it is replaced by an actual help menu (although it is on a piece of paper that looks like a note from the zombies).

In Plants vs. Zombies FREE, the Help can be accessed through Help & Options → About → Help, and leads to the EA help website instead.

About the Help note

There is no doubt that this was put in as a joke as the player gets some help when first playing the game (as well as a digital manual that comes with computer versions of the game, readme.html, and an instruction booklet with the Nintendo DS version), and as it says it was made by the zombies. For some versions, instead of an in-game help section, PopCap Games decided to put in a unique feature, the Tree of Wisdom, that gives the player tips on playing the game the higher it is grown. It will stop giving tips after it is grown it to 1000 feet (after 50 feet, it will only give 'milestone tips', after being grown to 100, 500 and 1000 feet).

There is no help note in the beta. The only thing that appears a window with the following text: The zombies ate the help section. Check out later!

Notes return in Plants vs. Zombies 2. The note still drops on the lawn like in the predecessor, but the writing itself is based on the timeline it is found in. They are dropped on the level right before the Gargantuar battle. 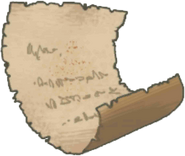 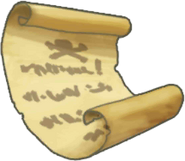 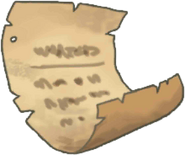 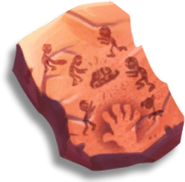 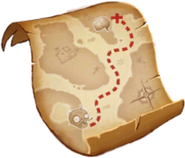 Sprite of Notes with various items 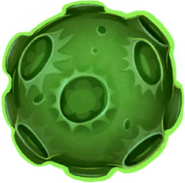 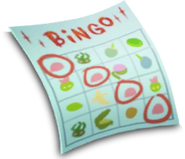 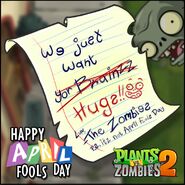 Plants vs. Zombies: Official Guide to Protecting Your Brains