No Fungus Among Us

No Fungus Among Us

Complete a Nighttime Level without planting any mushrooms.

No Fungus Among Us is an achievement that can be obtained on the Steam, iOS, PC, PS Vita, Nook, and Android versions of Plants vs. Zombies.

It is worth ten points on the Game Center. It requires the player to complete a Night level without using any mushrooms. There is a glitch on the PC and Steam versions where it can be completed in I, Zombie.

Strategy 1: Play Level 4-10 without using the Magnet-shroom and the Sea-shroom. Just pick whatever plants you want as long as there are no mushrooms.

Strategy 2: Play Level 2-1. Begin the level by picking the Sunflower, Cabbage-pult, Kernel-pult, Potato Mine, and Wall-nut. Now, you should pack any instant-kill plants you prefer to use (Except for Doom-shroom). Purchase the Garden Rake as well. If you followed the procedure, getting this achievement will be simple. When the level starts, plant a Sunflower in the same row as the Garden Rake. Proceed to do so once more. At this point, do nothing but plant Sunflowers until you have at least five, keeping them out of harm's way. Remember, do not plant them past the second row. Take full advantage of the Lawn Mowers and use Potato Mines (when possible) to kill zombies after the rake is used until you have enough Sunflowers that you can use to retaliate. Now, you may plant a Potato Mine in front of a proceeding zombie to further delay them. When you have a fair amount of Sunflowers, begin to plant Cabbage-pults and Wall-nuts to obstruct the incoming invaders. Do not waste your time using Kernel-pults yet. However, once you have every lane is guarded by a Cabbage-pult, you may now plant Kernel-pults. At this point, things will play themselves out as if it were a daytime level.

This strategy can be used when you first play Level 2-1. However, you will (or may) end up losing at least one Sunflower, as you will not have the rake or any other plants after Level 2-1. The strategy is exactly the same, replacing all catapult plants with Peashooters. 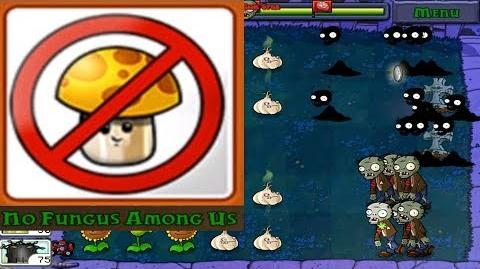 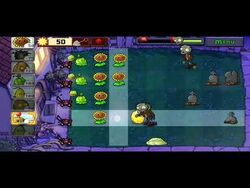 Plants vs. Zombies NO FUNGUS AMONG US Achievement-2
By Ytxmobile 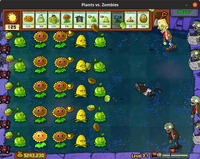 Level 2-1 using catapult plants and no mushrooms, by User:Ytxmobile