For the version in Plants vs. Zombies: Battle for Neighborville, see Ninjimp (PvZ: BfN).

The pufferfish Ninjimp holds is no ordinary pufferfish. The spikes, they're real.

(instantly kills them if eaten)

Ninjimp often uses smokebombs to tell everyone, there he comes!

Ninjimp (忍者小鬼僵尸; rěnzhě xiǎoguǐ jiāngshī) is an Imp variant that is encountered in Heian Age in the Chinese version of Plants vs. Zombies 2. He will appear either on his own or by being thrown by Shogun Gargantuar. He throws a pufferfish at plants two tiles away from them, dealing 250 damage. Splitting Stephania is the main counter for this zombie, as she can bounce back pufferfish projectiles that deal 125 damage to a zombie.

Ninjimp also appears in the "Airdrop Incoming!" surprise attack. If a smoke bomb lands on a random tile and explodes into smoke, Ninjimps will spawn from targeted smoke bombs.

Ninjimp is a regular Imp that wears a brown ninja suit. He also wears a brown bandana with a metal sign in a middle with a letter "Z" on it (implies that it stands "zombie"), brown handkerchief, and a brown belt with two sacks of smoke bombs. And finally, he wears two white socks and two brown sandals.

He also holds a pufferfish in his hand. If the pufferfish is being thrown by Ninjimp, it will start to inflate itself, like any real-life pufferfish would.

Ninjimps shares many similarities with the other Imps from different time periods. As such, he can be easily dealt with just like them. If they appear via the Heian Age's ambush, planting a Blover just when the message appear can blow them off the lawn, killing them. Alternatively, they can also be shrunken into oblivion via Shrinking Violet or stopped with Imp Pear by itself or its plant food effect.

However, Ninjimp is more dangerous to deal with than most Imps due to his pufferfish attack, which he can use every 3 seconds to instant-kill the frontmost plant if it's not a defensive plant. Fortunately, Splitting Stephania, a plant giving in the Heian Age can be used to deflect the attack back at Ninjimp. Infi-nut can also be used to stop his attack. 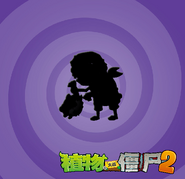 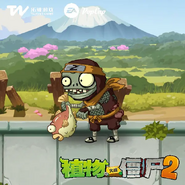 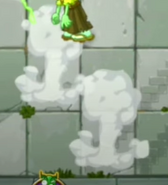 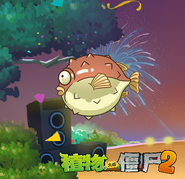 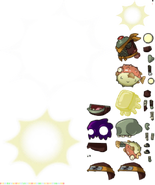 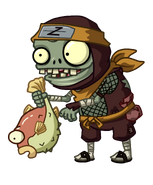 HD Ninjimp
Add a photo to this gallery

Retrieved from "https://plantsvszombies.fandom.com/wiki/Ninjimp?oldid=2373818"
Community content is available under CC-BY-SA unless otherwise noted.