For more information about this character, see Night Cap. 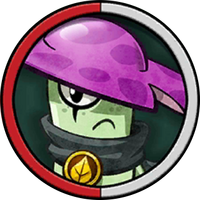 Nightcap is a plant hero in Plants vs. Zombies Heroes and the leader of the

Smarty classes. His signature superpower is Mush-Boom, which makes a Poison Mushroom on a selected lane and does 2 damage to a zombie on said lane.

It is unknown which exact plant he is a hero version of, but he bears a close resemblance to Scaredy-shroom and Fume-Shroom.

His name is a pun on "nightcap," a type of headwear used during sleep, referring to how mushrooms are nocturnal in Plants vs. Zombies, and "cap," a common name given to the mushroom pileus.

With the Kabloom and Smarty classes, Nightcap specializes in knocking out his opponent quickly, as he will oftentimes struggle in the late-game. Finish your foe quickly if you are to use rushes.

The strategy mentioned above is using mushrooms like Shroom for Two and Punish-Shroom, then boosting them with, but not limited to, Buff-Shroom, Storm Front, and/or Berry Angry to do a massive amount of damage in a single turn, leading to a quick win. For other options, Pineclone can be used to turn weaker plants like Pair of Pears and Puff-Shroom into much more powerful ones. Mush-Boom is also useful for taking down weak zombies and knocking off 3 damage off the zombie hero with Poison Mushroom as well. If certain zombies try to mess up this strategy,

Freeze or Bounce them, since Nightcap is also a Smarty hero. Nightcap's access to Planet of the Grapes also helps remedy the Kabloom's class' poor card draw options and supply Nightcap's rushing cards (as seen in Faceblaster 9000). If you don't plan on using mushroom decks, Nightcap gets more options regarding card gain, such as Magic Beanstalk and Mayflower.

Despite rushes being his preferred strategy, Nightcap has access to some of the most powerful plants in the late game, being Grapes of Wrath, Kernel Corn, Dandy Lion King, Winter Melon, The Great Zucchini, and Dark Matter Dragonfruit. This means that not only does Nightcap possess a strong early game, but a strong late-game as well. Use these plants to your advantage if you find yourself in the late game. Even with such powerful plants, however, transferring into the late game as Nightcap is really difficult, as his defensive game is among the worst of all heroes; none of his plants can reliably block attacks for a prolonged period of time, as all are too fragile to do so. Shroom For Two may solve this a bit, as they can wall some hits, but even then, it isn't the most reliable defense.

Nightcap also has no cards that can reliably instantly destroy zombies. The only methods of dealing with tough zombies is to Bounce them, use the

Freeze-Winter Squash combo on them, use Sizzle as a substitute for instant kills, or to fight fire with fire and beat them with tough plants. There is also the unreliable choice of using Witch Hazels, which are instant-kill plants, however random. In this case, rushes can save him again, as he can beat his foes before they can unleash powerful zombies that need to be taken care of.

Against Nightcap, it is essential to bring along tricks that can potentially wipe the board of mushrooms. Hearty heroes can use Weed Spray to get rid of his mushrooms, but only if their strength does not exceed 2. Crazy heroes have access to The Chickening, which will do damage to every plant in play. However, be careful when Punish-Shroom is on the field, as it can do damage to zombies on the field or your hero by a lot (depending on the number of mushrooms destroyed). Also, watch out for Pineclone as Nightcap can use it to seal his defenses. One strategy is stalling turns so that he ends up playing Magic Beanstalks or Petal-Morphosis in an attempt to draw more cards.

In case the tricks that can wipe the field are unavailable, you can attempt to copy his playstyle, though it is probably not recommended for several zombie heroes. Apart from that, also keep an eye on the aquatic lane as Nightcap may try to play an Amphibious plant there.

Nightcap will attempt to use a mushroom rush deck on you by spamming Puff-Shrooms with use of Shroom for Two and Mushroom Grotto, and supporting them with Punish-Shroom and Sportacus. If you don't manage to get rid of the mushrooms somehow, he will use Pineclone, then possibly Molekale, to finish you off. Make use of early removal tricks like Weed Spray and Bungee Plumber to remove his mushrooms as soon as possible. Z-Mech is the best hero to use since he has access to both the aforementioned tricks and zombies. Just be careful if Sportacus is on the field if you are to use tricks to remove the mushrooms.

In this deck, Nightcap will use berry plants to take you down. He will do a nasty combo consisting of playing Sergeant Strongberry followed by Sour Grapes or Cherry Bomb. Use Rocket Science to remove high-strength plants, and removal tricks like Bungee Plumber, Zombot's Wrath, and The Chickening to remove the other plants. Professor Brainstorm is the best hero here since he can use the aforementioned tricks. It is also recommended to rush Nightcap before he can unleash Grapes of Wrath.

Nightcap will attempt to swarm the field quickly with small plants such as Shroom for Two and Mushroom Grotto, as well as Cosmic Beans and Mayflowers, before transforming them into stronger plants with Petal-Morphosis or other cards. It is recommended to defeat him quickly, because he also has Reincarnation and Dandy Lion King in this deck.

Nightcap will not only swarm the field with cheap cards like Shroom for Two and Cosmic Bean, but also do lots of damage to you directly with Admiral Navy Bean and Astro-Shroom's abilities, while Planet of the Grapes ensures reliable card draw if one is in it. If you see Nightcap swarming the field, use removal tricks like The Chickening to avoid getting overwhelmed. Removing any Lima-Pleurodons, Admiral Navy Beans, and Astro-Shrooms on the field is also crucial, as they are the core cards in this deck. Fortunately, they are also destroyable via The Chickening. Quickdraw Con Man and Planetary Gladiator counter this deck very well, as the former punishes Nightcap for drawing cards, while the latter nullifies Astro-Shroom's damaging ability (although he still is vulnerable to Admiral Navy Bean's). Gentleman Zombie helps you play damaging tricks earlier.

Español
Community content is available under CC-BY-SA unless otherwise noted.