For the version in Plants vs. Zombies Heroes, see Nightcap.

Stick to the shadows with Night Cap and sneak more sneakily than you’ve ever snuck before. Then unleash the mushroom martial art, Fung Fu.

Night Cap is a playable plant class in Plants vs. Zombies: Battle for Neighborville. She is an

Excels at stealth and mobility. Use Shadow Sneak to get in and out of combat, or setup a knockout blow with Fung Fu.

Night Cap's primary weapon is the Spore Strike, Night Cap throws piercing blades that deal 18 damage each at a rate of 200 RPM (rounds per minute). She can throw 20 before having to reload.

Night Cap excels at stealth and mobility. Use Shadow Sneak to get in near an enemy, then take them down quickly by using Spore Strike, or go for a fast close-ranged kill with Fung Fu. Against large groups, Spore Strike can go through multiple enemies, hitting them all at once. If you lose too much health, use Shadow Sneak to retreat. If it is currently unavailable, quickly sprint away and jump around, so your opponents can't hit you, as you are a small, moving target.

Night Cap can also be good for support. Use Casting Shadows to help your team revive fallen allies without being seen, or to help you capture a zone. Casting Shadows can also be used to trap Zombies within it, allowing for an easy vanquish with Fung Fu. While inside Casting Shadows, enemies are vulnerable to Peashooter's Chili Bean Bomb, Oak's Roll for Damage and Super Sap Trap, Acorn's Sap Trap, or an other form of damage. Night Cap's high rate of fire can also make her a great defender at close quarters, or can be used to quickly destroy Super Brainz's Alpha Better Shield.

Night Cap is small and jumpy, so Engineer's splash damage can take her down fairly easily, especially when combined with Heavy Helper to let him fire very quickly. If the Night Cap uses Shadow Sneak to try to escape, the Soldier's Stink Cloud could be useful to potentially hurt the Night Cap and maybe even confuse it. Soldiers can also use there ZPGs to do damage, as they deal splash damage. Scientists can Warp around to dodge the Night Cap's attacks. 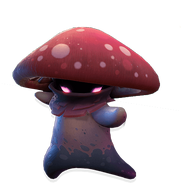 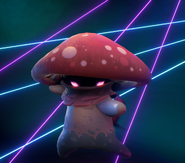 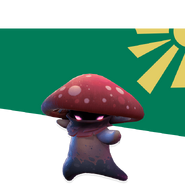 Add a photo to this gallery
Retrieved from "https://plantsvszombies.fandom.com/wiki/Night_Cap_(PvZ:_BfN)?oldid=2311203"
Community content is available under CC-BY-SA unless otherwise noted.