.
Heal your Hero for 2.
Just a quick bite.
Nibble is a premium uncommon zombie trick card in Plants vs. Zombies Heroes and a member of the

to play, and its ability gives a selected plant -1

and heals the zombie hero for up to 2

It is based on chattery teeth, a children's wind-up toy.

Its name is based on the real meaning of nibble, which is to take small bites out of something.

Despite this trick being able to heal you, there are not many instances in which you would plan to play this solely to heal, but rather take out, or nullify a threat that has either 1 strength, 1 health, or both in the early to mid-game.

However, despite its healing ability being rather minor, it should not be disregarded either, as it could easily mean the difference between victory and defeat, and should be taken into account.

Take note this only weakens a plant but does not do damage, so you cannot play Evaporate to destroy it afterwards. However, because it does not do damage but can still lower the plant's health, this can get rid of glass cannons protected by Force Field or Peel Shield, which soft removals cannot do.

Nibble is a very cheap trick that is able to mess up your plants by lowering their stats so that they fail to destroy the target or survive an attack. Fortunately, a stat-boosting card can easily negate or lessen its ability.

A plant that is basically immune to this trick is Black-Eyed Pea, as its ability negates Nibble's ability. However, Nibble can destroy it if its health has been knocked down to 1. 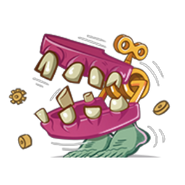 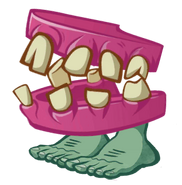 3 Nibble cards along with a Haunting Ghost card 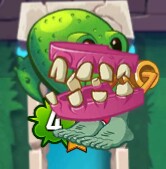 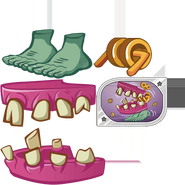 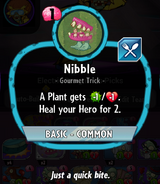 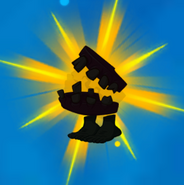 The player having the choice between Nibble and Smashing Pumpkin as the prize for completing a level before update 1.2.11