Plants vs. Zombies Wiki
Register
Don't have an account?
Sign In
Advertisement
in: China exclusive, Articles with conjectural titles, Archived,
and 10 more

I need my TIME MACHINE!
Nezha Peashooter is a conjectural name for this article.
If you know the official name or have a better name or
translation for it, please contact a wiki administrator to change it.

Buying with 380 diamonds
Nezha Peashooter (哪吒射手; pinyin: Nézha shèshǒu) is a plant in Plants vs. Zombies: Journey to the West. It is one of the Heroes. It fires peas in 3 lanes.

It is based on a Threepeater and Nezha, a protection deity in Chinese culture who appears as a character in Journey to the West as an enemy, and later an ally, of the main character Sun Wukong.

It being based on a Threepeater is possibly a play on Nezha's title of "Third Lotus Prince".

It is excellent in 2-11 because of its ability of piercing through zombies and attacking multiple lanes. 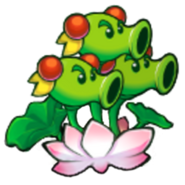 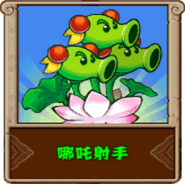 Icon in the Hero selection menu

Nezha Peashooter in an advertisement for Chinese New Year update

Nezha Peashooter in the background of another advertisement