Newspaper Zombie is a Spawnable Zombie found in Garden Ops and are able to be spawned in the Gardens & Graveyards and the Taco Bandits game modes in Plants vs. Zombies: Garden Warfare and Plants vs. Zombies: Garden Warfare 2. It attacks plants by hitting them with his newspaper. It uses his newspaper as a shield, but it is weak. Like the Screen Door Zombie, it can be attacked from behind, receiving full damage. Its attacks are the Zombie Hurt and the Hard Rock Toss. Each Zombie Hurt attack deals 15 damage. Its pirate counterpart is the Map Pirate, and in Garden Warfare 2, its plant counterpart is Leaf Shield Weed.

Uses his newspaper as a shield to absorb incoming fire.

The newspaper can withstand 35 damage before being destroyed.

The newspaper has a decent amount of health, making the zombie somewhat protected. However, due to its head and back being vulnerable, it does not have a very large effect. Because of this, use Newspaper Zombies as you would with Browncoat Zombies i.e. as a distraction and to help capture the garden. 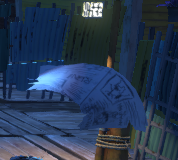 His newspaper seen as a map decoration

Retrieved from "https://plantsvszombies.fandom.com/wiki/Newspaper_Zombie_(Spawnable)?oldid=2199596"
Community content is available under CC-BY-SA unless otherwise noted.