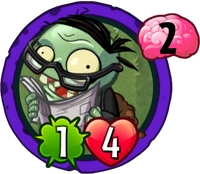 .
Newspapers are an undead medium.
Newspaper Zombie is a premium uncommon zombie card in Plants vs. Zombies Heroes and a member of the

. He has the Gravestone trait, and his ability gives him +4

every time he takes damage. His closest plant counterpart is Hibernating Beary.

Newspapers are an undead medium.

Consider this as the zombie equivalent of Hibernating Beary. However, while Hibernating Beary is harmless when unprovoked, Newspaper Zombie can still fight in the same situation. Since he has less health than Hibernating Beary, you should not expose him to attacks that can severely damage or destroy him, but instead, play him in front of a weak plant (as your opponent will not play one in front of him first).

You can also intentionally raise Newspaper Zombie's strength by using "self-harming" zombies like Fireworks Zombie, Gas Giant, and Barrel of Deadbeards, or by taking advantage of Hot Lava or Spikeweed Sector. However, this strategy is rather risky, as there is no knowing of what your opponent will do after you have stuck to it; 1 or 2 health may determine whether Newspaper Zombie survives or not. Also, for the latter, your must have an environment of yours to override theirs, as that is the only way to control them.

Electric Boogaloo and Z-Mech have stat-boosting cards that allow Newspaper Zombie to take more damage and get more strength, as well as

Frenzy-granting cards, assisting his offensive capability greatly. As Impfinity, Headstone Carver can give Newspaper Zombie a small boost, while Smoke Bomb can move him out of dangerous lanes and onto desired ones. Professor Brainstorm has bonus attack cards; while they do wreak less havoc than giving Newspaper Zombie the

Frenzy trait long-term, they allow him to finish your opponent off swiftly if Newspaper Zombie has gained enough strength

Since he is a professional zombie, Z-Mech can use him to boost Zombie Middle Manager's strength or as Evolution material for Jurassic Fossilhead, which should not be too hard due to his high base health for his cost and the fact that he has the Gravestone trait.

Against Newspaper Zombie, refrain from whittling his health down, as his strength will snowball quickly; if your opponent decides to boost him at that state, your defeat may be sealed. Instead, aim to remove him as quickly as possible; since very few early-game plant combinations can remove him in a turn, instant-kills are the best response, and Grave Buster is the most efficient, being able to destroy Newspaper Zombie as early as turn 2, and before he can attack. Bouncing him is also a good option if his strength gets too high. But if you have to use a plant, use one that can destroy him in two turns or less.