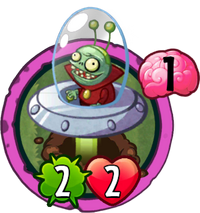 When an Environment is played, this does a Bonus Attack.
He's not small, he's just very compact.
Neutron Imp is a galactic super-rare zombie card in Plants vs. Zombies Heroes and a member of the

. He does not have any traits, and his ability makes him do a bonus attack every time an environment is played.

He is based on an unidentified flying object (UFO), a term used to describe any object in the sky that is not identifiable as a known object or phenomenon, and some elements of a stereotypical alien, as seen by his antenna.

His name is a combination of "neutron," referring to an Imp's size (as both a neutron and an Imp are small), and "Imp," the zombie he is based on.

His description is a reference to an Imp's short stature, as well as the fact he is named after a neutron, a subatomic particle.

This zombie can generally be treated as Re-Peat Moss, but as a zombie that benefits from environments instead of tricks. With this ability, you want to bring as many environments as possible to make him do bonus attacks easily. Using cheap environments such as Transformation Station and Graveyard is effective, while environments such as Area 22 and Meteor Z can benefit his ability greatly if played on his lane. You can also use Excavator Zombie to replay environments, or play Laser Base Alpha on Neutron Imp's lane to destroy all plants fronting him, although these two combos can only be achieved naturally as Super Brainz or Huge-Gigantacus. However, you can only have three environments on the field, and overriding any of yours just to activate his ability is a waste. You could put yourself in a dilemma if you have any Neutron Imps in your hand while your environments are on the field, because while Neutron Imp is useless without his bonus attacks, you don't want to waste any environments either.

Neutron Imp is also good at countering strategies that are reliant on environments, such as the Venus Flytraplanet + Heartichoke combo and the Planet of the Grapes + Admiral Navy Bean/Astro-Shroom combo, but boosting him is preferred as 2 damage will not deter your opponent from playing their environments and reaping greater results. However, you shouldn't rely on plant environments to make him do bonus attacks as not every hero has an environment-heavy deck, so treat this as an added benefit instead.

His science tribe means he can get more strength every time he attacks with Zombot Drone Engineer on the field, while playing Gadget Scientist is essentially the same as playing an environment (although much more expensive and thus, not recommended unless there are other science zombies on the field). His Imp tribe also means that Super Brainz and Huge-Gigantacus can pair him with Toxic Waste Imp and Imp Commander. And because of the large number of bonus attacks resulting from his ability, Gargantuar Mime is a very good partner for him.

Just keep in mind that Solar heroes may have Wing-Nut to shut off his bonus attack.

You will want to destroy this zombie as quickly as possible as your opponent can play a lot of environments which not only benefits the zombie in the environment but also allows Neutron Imp to do a bonus attack. Since his stats are low, many early-game cards like Banana Bomb and Weed Whack can destroy this very easily. You can also prevent him from doing bonus attacks with Wing-Nut. It is also best to get rid of any Toxic Waste Imps and Imp Commanders if you are fighting against Super Brainz or Huge-Gigantacus. If necessary, you can also play Brainana to prevent any environments from being played during the Zombie Tricks phase, denying bonus attacks, but watch out for Gentleman Zombie in this case.

You also need to be careful when playing your own environments, including plants that make them such as Fireweed, as they also count towards his ability. However, the aforementioned Wing-Nut will shut that ability down, provided you are playing as a 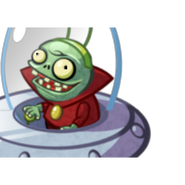 Deadly trait and a mustache (Note that he was Conjured by Imposter.)

Neutron Imp seen in the "cockpit" in Area 22

Neutron Imp with a mustache being destroyed by Devour 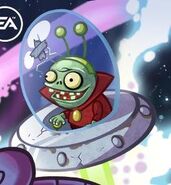 Neutron Imp on the title screen