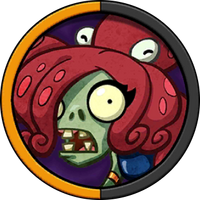 Neptuna is a zombie hero in Plants vs. Zombies Heroes and the leader of the

Sneaky classes. Her signature superpower is Octo-Pult, which makes an Octo-Pet on a selected lane.

She is based on a mermaid, a mythical aquatic creature with the head and upper body of a female human and the tail of a fish. Her holding a trident and wearing a crown (technically, it is her octopus ‘hair’ who’s wearing it) may be a reference to Neptune, the Roman god of the sea. Her name is a portmanteau of ‘Neptune’, referring to her appearance, and ‘tuna’, referring to the fact that she is half fish. Neptuna may also be a reference to Aquaman from DC.

Her description has a pun: the word "tank" can either mean an aquarium tank (her fish bowl) or a type of armored war vehicle.

Neptuna's hair may also reference a scene in Wabby Wabbo in which Crazy Dave is shown with an octopus on his head.

She is the very first Zombie to fight in a tank.

Neptuna bamboozles her opponents with a variety of deceptive Gravestone Zombies, while hitting hard in the water lane.

Neptuna relies on her vast array of Gravestone zombies to keep the opponent guessing. With access to both Hearty and Sneaky cards, she can also effectively improve the survivability of any weaker zombie fighters, such as Imps. Several Sneaky cards allow her to move her zombies out of harm's way or Bounce dangerous plants, and Hearty cards include both health boosts and the ability to move plants away from frail zombies. She can effectively hold the board during the plants' turn, as her gravestones are immune to plant tricks (with the exception of Grave Buster, Blockbuster and Grave Mistake) and zombie tricks allows her to utilize the aforementioned movement or boosting cards to ensure that zombies remain to hold the board. Amphibious zombies are also potentially dangerous to plants if the enemy hero lacks removal or Amphibious plants to counter. Laser Base Alpha allows her to strike quickly and do severe damage to her opponent's defenses.

You can combine the use of gravestones to keep activating zombies with very useful abilities such as the Intergalactic Warlord able to continuously activate his ability and keep on buffing your zombies.

When playing as Neptuna, care must be taken to ensure that you can play gravestones whenever necessary. This means balancing how many zombies are on the board, which may be done by allowing older, low-strength/health zombies to be destroyed or by using cards such as Firefighter to Bounce useful zombies back into your hand for use later on.

Also, remember that Neptuna's primary asset is unpredictability. As such, make an effort not to play Bounced Gravestone zombies shortly after they have returned to your hand. In addition, her signature superpower, Octo-Pult, which allows her to make a zombie fighter during the Zombie Tricks phase, makes sure the plant hero won't know an Octo-Pet is being played before it's too late.

However, Neptuna lacks reliable ways to draw cards, and has to rely on In-Crypted, which can only be used once in a game, to do so. If she wishes to cover it, she can resort to using Terrify, Imp decks with Imp Commander, or Going Viral, although she may end up drawing the same card over and over again.

Neptuna is a tough opponent to fight against, due to the fact that the majority of her zombies can only be eliminated on the turn after they are played, due to their Gravestone traits. That being said, she has few ways to heal herself despite being Hearty. Therefore, the most effective way to deal with her is to do direct damage.

Strikethrough plants and damage-dealing cards such as Berry Blast are most effective for this style. If the player has cards to take advantage of or create open lanes, then

Anti-Hero plants are also a good choice. Naturally, bringing Grave Buster or Spyris can also throw a wrench in her plans, as Neptuna has many Gravestone zombies in her arsenal.

Alternatively, the player can ignore zombies altogether and allow them all to live, thus disabling her ability to play Gravestone zombies. This is not a guaranteed win though, as the zombies have the potential to grow out of hand with boosting cards such as Monster Mash or Team Mascot, if a sports deck is being used.

Retrieved from "https://plantsvszombies.fandom.com/wiki/Neptuna?oldid=2249790"
Community content is available under CC-BY-SA unless otherwise noted.