A money bag
Neon Mixtape Tour - Day 5 is the fifth level of Neon Mixtape Tour in Plants vs. Zombies 2. It is a Save Our Seeds level. The player needs to protect two Phat Beets and two Wall-nuts on the seventh and sixth columns respectively. Once the punk jam starts, it plays until the level ends. When this level is finished for the first time, the player unlocks the Celery Stalker.

Leave room in the first column so it will allow the Punk Zombies to kick the endangered plants back there. Try not to kill those zombies until you feel your plants are safe enough. Try to kill zombies slowly before the music starts to give you time for sun build-up and defenses. Also, put a sacrifice plant in front of the endangered Phat Beet until it is ready to be kicked back, as it is weaker than the Wall-nuts. Picking Wall-nut for Wall-nut First Aid is a good option. Use Plant Food to build sun or you can also re-enforce the Wall-nuts with it if they get weak in case the Punk Zombies die before moving them. Chard Guard is another good pick also. Plan your offense around either row attacking plants, group killing, or a mix that works for you. Have at least one instant kill plant like Cherry Bomb or Lava Guava.

This level can be medium difficulty with the new Cactus premium plant's penetrating ability but rather hard without it if the Punk Zombies are not able to kick back the endangered plants.

This strategy can beat the level without Plant Food, premium content, gemium plants, or losing any lawn mowers. It also does not require plants obtained in levels after Day 5 (such as Thyme Warp and Garlic).

At the beginning, plant Sun-shrooms in all tiles of the first and second column except for the second and fourth lanes, and an extra one in the center lane, third column. As this is being done, plant a Tall-nut in front of the endangered Phat Beet that is being approached by the first few zombies, and a Wall-nut DIRECTLY BEHIND the endangered Wall-nut, not in front. Use Stallia on the zombies themselves to delay them. Protect the other endangered plants in the same manner, save for using a Stallia on the Conehead Zombie walking between the Phat Beets to ensure he is killed.

With the Wall-nuts safe, as soon as possible, plant Snapdragons behind the Phat Beets, a third Snapdragon between them, and Magnet-shrooms behind them. Afterward, plant Spikerocks on all tiles ahead of the Phat Beets' defense. Constantly use Stallias on the zombies to slow down the horde. Use surplus sun to spam the front end of the lawn with more Magnet-shrooms and Spikerock. This will make it extremely difficult for Punk Zombies to kick even the Phat Beets' protection away. If they succeed, there will be spaces available for them, and with two different -Nut plants to use, replacing them is not an issue. If you need to heal the Tall-nuts, dig them up and then replant, rather than use Wall-nut First Aid.

At the beginning, plant Sunflowers on the first column. When the first zombies come, stall them with Iceberg Lettuce. DO NOT put Primal Wall-nuts down just yet, Punk Zombies can kick them back, rendering them almost useless to protect the endangered plants. However, once the first Punk Zombies start coming, kill them with Magnet-shroom.

Once you have enough sun, put a Red Stinger in each row, so every lane has a proper defense. If you are positive their no more Punk Zombies around, put Primal Wall-nut in front of the endangered plants, so you can block the plants from getting eating. If it is a total emergency, you can use Plant Food on Iceberg Lettuce to freeze all the zombies onscreen. If a zombie is about to eat one of the endangered plants, especially Phat Beets, quickly put Plant Food on it to give the Phat Beet immunity and kill all the weak zombies around it.

Plant an Infi-nut in the second column from the right and give it Plant Food.

Plant the Sun-shrooms (or Sunflowers) in the first column from the left.

When a zombie (not Punk zombie) will come, plant a Citron (or Pea pod, or Peashooter).

When a Punk zombie will come, plant Primal peashooter (or Chard guard). 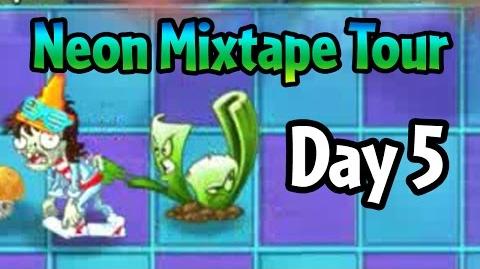 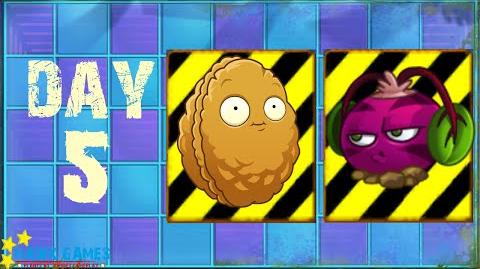 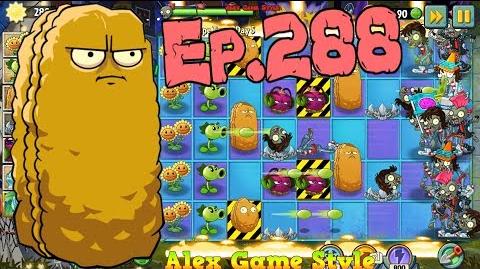 Retrieved from "https://plantsvszombies.fandom.com/wiki/Neon_Mixtape_Tour_-_Day_5?oldid=2364363"
Community content is available under CC-BY-SA unless otherwise noted.