For the Chinese version of this level, see Neon Mixtape Tour - Ultimate Challenge.
Not to be confused with Modern Day - Day 34, another level that features the Zombot Multi-stage Masher.

A money bag
Neon Mixtape Tour - Day 32 is the thirty-second and last level of Neon Mixtape Tour in Plants vs. Zombies 2. The player must defeat the Zombot Multi-stage Masher, the boss of the aforementioned world, in order to finish the level. When this level is finished for the first time, the player earns the Neon Mixtape Tour Trophy.

(Dr. Zomboss appears)
Dr. Zomboss: Hmmmm... you're in danger above. You're a fool; and so knew I.
Dr. Zomboss: Hear me now: Ever shall you give up; ever shall you be down; always you'll run aground, I'll revert you.
Dr. Zomboss: I intend to make you cry: I mean for you to say goodbye: I'm not really that nice a guy - I'll alert you!
(Dr Zomboss leaves, Crazy Dave appears)
Crazy Dave: Ouch!
(Crazy Dave leaves)

No lawn mowers lost by BF10

Phase 3 by LegendofNickson (did not mean to use Power Toss :3) 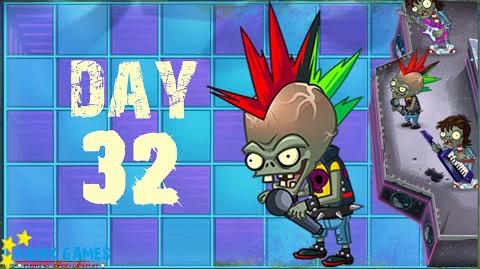 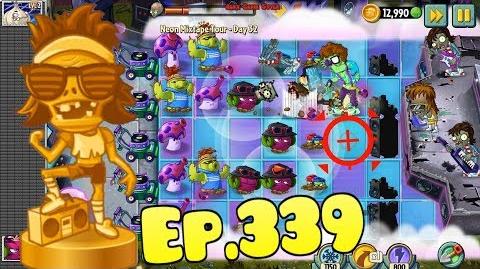 Retrieved from "https://plantsvszombies.fandom.com/wiki/Neon_Mixtape_Tour_-_Day_32?oldid=2281166"
Community content is available under CC-BY-SA unless otherwise noted.