Guacodile is very effective on this level, especially for conserving sun. It can empty an entire lane of MC Zom-Bs, Breakdancer Zombies, and regular/weakened zombies, and can soften up stronger zombies to be finished off by Magnifying Grass with lesser shots required. It can also destroy arcade machines in one shot if its rush attack is triggered right next to them.

At the beginning of the level, reserve the first column for Magnifying Grass and the second through fourth columns for Sun-shrooms. When the first Impunk and Punk Zombie appear, use Stallia on the Punk and shoot the Imp down. Let the Punk approach the third column, then plant a Magnet-shroom on any adjacent tile to kill it. A second Punk will appear. If there is a third Punk, slow it with Stallia before it gets too close to the first Magnet-shroom planted, then kill the second Punk in the same manner as before with a second Magnet-shroom. This will all delay the first Huge Wave of zombies so that all the columns of Magnifying Grass and Sun-shroom can be set in place and the player has a reasonable amount of sun to use.

After the Punks are killed, two Arcade Zombies will attack. When they take damage, the first Huge Wave of zombies will appear; destroy their arcade machines with Grass or Guacodile before they can produce zombies. Ignore the Huge Wave of zombies that appear and farm for sun instead, killing only any nearby stray zombies. When the core zombie force closes in, use Thyme Warp to bring them back to the front of the lawn and kill most of them and any nearby arcade machines with a Cherry Bomb. This will trigger a rap jam and a horde of MC Zom-Bs and Breakdancers. Use Guacodiles to kill them and destroy leftover arcade machines while planting more Magnet-shrooms ahead of the Sun-shrooms. Shoot down any strays or survivors from Guacodile attacks. When the final wave and the Gargantuar appears, use a Thyme Warp-Cherry Bomb combo to destroy most of the zombies and weaken the Gargantuar so that it can be finished with Stallia and Magnifying Grass, then finish off the remaining zombies.

Start planting Twin Sunflowers at the first column. When the first zombie appears, use the Electric Blueberry and fill the second column with them. Plant Gold Blooms to get sun and plant Winter Melons on the third and fourth columns. Put the Infi-nut in the fifth column, third lane and give it Plant Food. And put Magnet-shroom on the rest of the spaces. 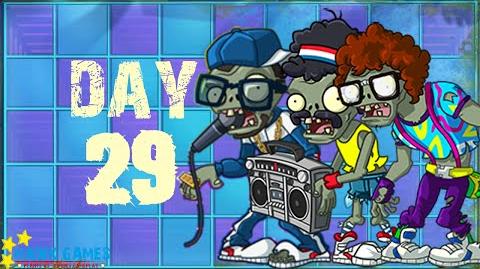 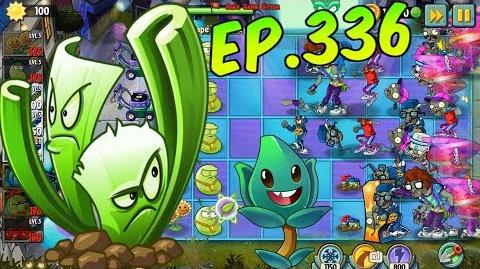 Retrieved from "https://plantsvszombies.fandom.com/wiki/Neon_Mixtape_Tour_-_Day_29?oldid=2349453"
Community content is available under CC-BY-SA unless otherwise noted.