Boombox Zombies are highly annoying here as they tend to appear in large numbers, especially very early on, so they can reach the sixth column easily. To prevent this, it is recommended that the player use Magnifying Grass, groups of Electric Blueberry, Endurian, area-of-effect plants like Phat Beet or ground plants like Spikerock to quickly defeat them. The player should also be aware of Punk Zombies, MC Zom-Bs and Breakdancer Zombies as the former can push back or quickly destroy plants, giving them an easier advantage for reaching the column and the latter can kick them right onto the column, allowing them to use their abilities right at that instant. Arcade Zombies are very dangerous as they appear early and quickly crush underground plants with their arcade machines, along with an early spawning of 8-Bit Zombies. The player should try using instants as soon as possible to destroy the arcade machines before they can cause problems.

This strategy can complete the level without Plant Food, premium content or losing any lawn mowers.

The Boombox Zombies cannot affect Magnifying Grass, so ignore them at the beginning and fill up the first column with Magnifying Grass and the second and third columns with Twin Sunflowers, prioritizing the sunflowers first. Shoot the Boombox Zombies with Magnifying Grass only when they are getting too close, or if too many of them are somehow blocking the Twin Sunflowers from producing sun. When the three Arcade Zombies appear, use a Cherry Bomb to destroy ONLY their arcade machines, without harming them. Leaving them alive will continue to drag out the beginning out the level, letting you stockpile even more sun. You will eventually have enough sun to destroy everything else in the level, but plant Magnet-shrooms in the fourth column and Celery Stalkers in the sixth column to greatly reduce the amount of sun you need to remain safe. Shoot down or Cherry Bomb any arcade machines as soon as they appear, blasting through zombies in the way if need be, as well as MC Zom-Bs if they are getting near the frontlines and especially if they have Breakdancer Zombies there to push them. You can use Thyme Warp to round up heavy crowds of enemies together for a big Cherry Bomb attack, saving a great deal of sun, especially during the final wave. 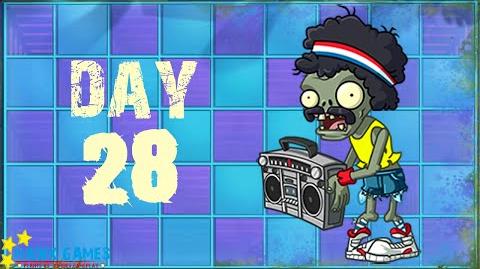 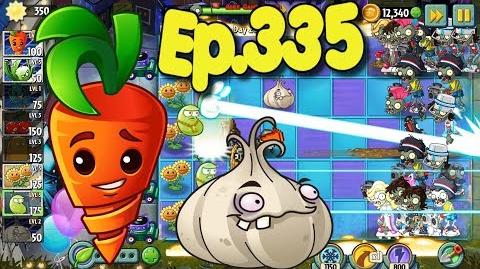 Retrieved from "https://plantsvszombies.fandom.com/wiki/Neon_Mixtape_Tour_-_Day_28?oldid=2349451"
Community content is available under CC-BY-SA unless otherwise noted.