Survive and protect the endangered plants
Neon Mixtape Tour - Day 26 is the twenty-sixth level of Neon Mixtape Tour in Plants vs. Zombies 2. It is a Save Our Seeds level. The player must protect four endangered Spore-shrooms in the seventh column. When this level is finished for the first time, the player unlocks the Intensive Carrot.

Let the Punk Zombies kick back the Spore-shrooms or else other zombies like MC Zom-B will kill the Spore-shrooms very easily. At the end, the Hair Metal Gargantuar is very harmless, as it always spawns in the center row. However, this doesn't mean it shouldn't be taken out. It can still easily plow through defenses, especially if multi-lane attacking plants are being used. However, if the player has a piece of Plant Food, they can use a straight-shooting plant such as Repeater to defeat it. The player should not let MC Zom-Bs get far if they kill the Punk Zombies at first. Another option is to let Breakdancer Zombies kick other zombies, then use Blover or Hurrikale to blow them away, instantly killing them. Arcade Zombies, themselves, are not a threat, since the player should be able to defeat them while their jam plays. However, the player should always be aware of their arcade machines, as the large density of 8-Bit Zombies can easily cause a game over.

Fill up the first two columns with sun-producing plants. As the first Conehead Zombie appears, let it reach the third column, then stop it with a Stunion and kill it with a Celery Stalker. Let the Punk Zombies shove the endangered Spore-shrooms and be killed by them. If need be, though unlikely, dig up plants behind them if they are about to be kicked off out the lawn. After they are dead, a Buckethead Zombie will enter the center lane. Let him reach where the Conehead was killed and kill him with the same Stunion-Celery Stalker combo, however, do NOT remove his bucket with a Magnet-shroom. This will delay the coming zombie hordes as long as possible.

During the later waves, a large force of Breakdancer Zombies and MC Zom-Bs will appear. Use a Cherry Bomb immediately to kill most of them; the survivors will not be able to get through all the chaos and plants in the way even if an MC Zom-B is kicked forward into the Snapdragons. For the final wave and Gargantuar, use a Thyme Warp to group all the zombies together, then kill the Gargantuar and everyone around him with a Stunion-Cherry Bomb-Celery Stalker combo and mop up the remaining zombies. If you use Plant Food with this strategy, the Snapdragons in the middle lanes will destroy most everything by themselves.

This strategy focuses on holding back the zombies until you can use Spring Bean PF effect and Blover Combo. Keep in mind that using Blover to blow away zombies bounced by Spring Bean requires you to time it properly, otherwise, the zombies will just be pushed back.

Starting off, commence planting two rows of Sun-Shrooms in the last two columns. Pay no attention to the Conehead Zombie until he reaches the fourth column. When he does reach the fourth column, plant a Primal Wall-nut on the third column and proceed to kill him with Ghost Pepper. By now, the punk music should start playing and Punk Zombies should come. Ignore the Punk Zombies and let the Spore-shrooms kill them, so the Spore-shrooms could be kicked back to the fourth column. The Buckethead Zombie in the middle row can be simply be killed by Spring Bean and Blover.

First part is the rap music. Make sure ALL the zombies come out on the lawn, then use Thyme Warp to send them to the back of the lawn. When you see the white outlines of the zombies, place the Blover on the lawn. The zombies get pushed by the Breakdancer Zombies and get blown away from the Blover. This should immediately start the pop music.

Pop music is also easy. Place Ghost Pepper on the lane with the Glitter Zombie holding the Plant Food. This will again, immediately start the next music, which is 8-bit.

This part is relatively hard, but possible. With the Plant Food you got from the Glitter Zombie, wait until five arcade cabinets and two Arcade Zombies are on the lawn, then put Plant Food on the Spring Bean and use Blover. This will again, start the next music.

Do the same thing as before: use Thyme Warp then kill the zombies with Blover while the rap music plays, starting the metal music. The Gargantuar will start coming in the middle lane, but prioritize the incoming zombies. Using Blover, you can hold back the horde, as Blover can blow away zombies pushed by Primal Peashooter's pea. Killing the Gargantuar comes last. To defeat it, place a Spring Bean under it and quickly place a Blover. This should kill it quickly. If you fail to defeat it, use the Primal Wall-Nut to stall it until Spring Bean is available and you can retry the trick.

3. When Escape Roots ready use then for Spore Shrooms (all).

4. Also put some attacking plants to Lane 3 and then on others.

5. Survive and dont lets zombies to enter Row 1 and done. 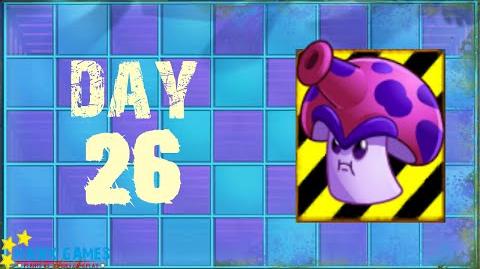 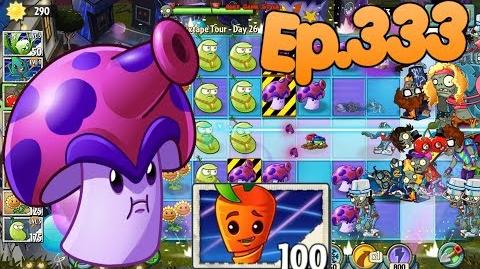 Retrieved from "https://plantsvszombies.fandom.com/wiki/Neon_Mixtape_Tour_-_Day_26?oldid=2349449"
Community content is available under CC-BY-SA unless otherwise noted.