Don't let the zombies trample the flowers
Neon Mixtape Tour - Day 21 is the twenty-first level of Neon Mixtape Tour in Plants vs. Zombies 2. The objective of this level is that the player must prevent the zombies from trampling flowers located between the third and fourth column. The order of the jams is the following: punk, rap, punk, rap, punk, and rap. Therefore, even though Hair Metal Gargantuar will appear in this level, its jam will never play. When this level is finished for the first time, the player unlocks Spore-shroom.

This level is difficult because of the zombies in this level. Breakdancer Zombie plays a huge role in the difficulty, as it can kick zombies closer to the flowers during the rap jam. If there are large groups of Breakdancer Zombies paired with groups of Bucketheads and Punk Zombies, mass mayhem can happen. The player can easily lose the level because of the Breakdancer Zombies. On the other hand, Punk Zombies should be dealt with carefully, as they can push the player's defenses back, making zombies walk to the flowers more easily. Finally, a Hair Metal Gargantuar comes in the final waves, so try to defeat it immediately, using plants like Cherry Bomb and Grapeshot.

Plant your Sun-shrooms in the column closest to home. Use Stallia to slow the group of oncoming zombies and keep collecting sun. After planting a full column of Sun-shrooms, place Chard Guards in the rows with the zombies in them. Upon entrance of the first Punk Zombie, place down a Magnet-shroom in the center row. Plant a full column of Chard Guards and keep them packed with leaves, while giving your Sun-shrooms Plant Food to speed up production. Place Melon-pults behind the Magnet-shrooms to destroy the crowd. Breakdancer Zombies are useless against the Chard Guards, since Chard Guards throw the tossed zombies behind the Breakdancer Zombie. Eventually, Hair Metal Gargantuars will appear. Slow them down while using Chard Guard to disable his smash while slowed. Keep this up until final wave, when Impunks may be thrown into your defense. Luckily, they land past the flowers, so toss the Impunks back (or defeat them in your defense) and keep attacking until Hair Metal Gargantuars are dead. You may want to use lawn mower to speed up the final stage.

Created by Redhonker
This does not require premium plants and you can win without losing lawn mowers.

Start planting your Sun-shrooms in the first column. Use Stallia and Chard Guard to slow/push back the first wave of zombies. Depending on how much you have to spend on fending off the first few zombies, you can switch somewhere in the second column to Twin Sunflower. Later on, when you have time, you can replace Sun-shroom with Twin Sunflower. The goal is to get enough sun to plant Winter Melons. When the first Punk Zombie enters, plant a Magnet-shroom in the center row. Use a few Fume-shroom to build up defenses. Try to delay the killings so that you can have more time to collect sun. When Breakdancer Zombies appear, use more Chard Guard to bounce back zombies kicked forward. At this point, you should have enough sun to plant Winter Melons. Use them wisely to slow down the Zombies. Finally, Hair Metal Gargantuars will appear. Use Chard Guard to push them back. When Imps are thrown in, use Chard Guard or Stallia, or even Plant Foods on Winter Melons to take care of them.

Kill the first 2 zombies using fume shroom as your get your sun count up. Get at least 1 or 2 magnet shrooms out before the punk zombies come. Plant walnuts on or near the flower line to keep them safe from breakdancers. When overwhelmed, use thyme warp or boosted iceberg lettuce. To kill the gargs, use iceberg and stallia, If you can take them out, use mower launch. HERE IS THE LAWN SETUP: Legend: <Sun>: sun plants <Fume>: fume shroom <Nut>: walnuts <Mag>: magnet shroom <Cel>: Celery stalker:

By SaveTheLawnMower. Chard Guard helps prevent Punk Zombie from getting close to Magnet-shroom. 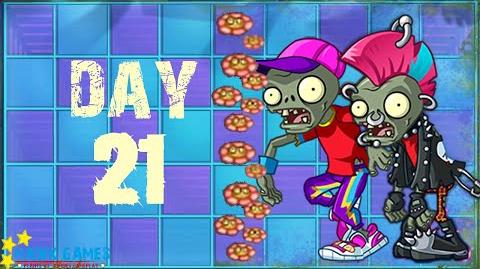 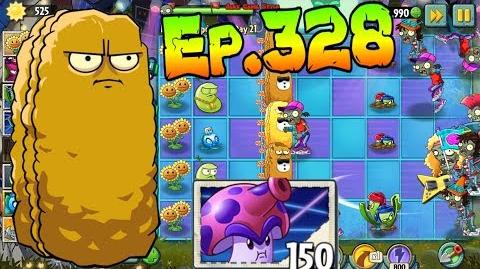 Retrieved from "https://plantsvszombies.fandom.com/wiki/Neon_Mixtape_Tour_-_Day_21?oldid=2356655"
Community content is available under CC-BY-SA unless otherwise noted.