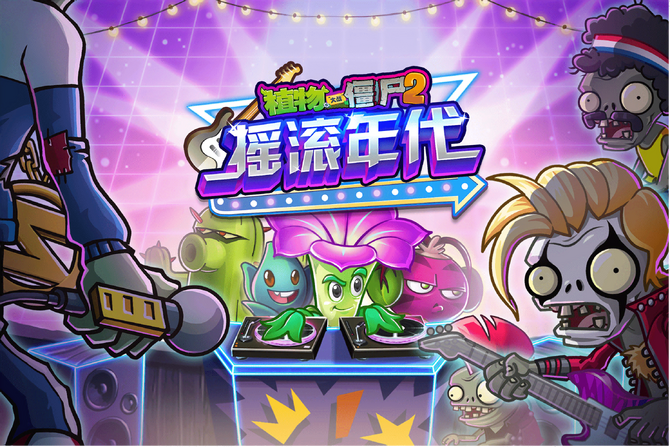 Neon Mixtape Tour (摇滚年代; pinyin: Yáogǔn Niándài, translation: Rock Ages) is the 11th world released in the Chinese version of Plants vs. Zombies 2. It was released on September 20, 2016 on iOS devices, and on September 23 on Android.

This world introduces MC Glory as the new Chinese-exclusive plant to this world. It also introduces a new ambush zombie, the Bass Zombie.

This world takes place in the 1980s, when there were a lot of bands representing a variety of musical genres, such as pop, punk, or metal. Jams, the environment modifier of this world, represent that variety through gameplay (more info below). Crazy Dave also claims to remember this period from when he was a kid.

Gel your hair and time travel back to 1980 and join the big rock dance party. Many classical pop songs and arcade games incoming, are you ready for it?

Jams are the main gimmick of Neon Mixtape Tour that change the music of the gameplay at any time. Differently from other worlds, the music will make the zombies move faster or slower, and also make special zombies, who are Punk Zombie, Glitter Zombie, MC Zom-B, Breakdancer Zombie, Arcade Zombie's arcade machine, and Hair Metal Gargantuar, exhibit their special ability. They will only exhibit their special ability if their preferred music or jam is playing. There are six jams in total. 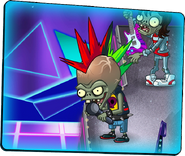