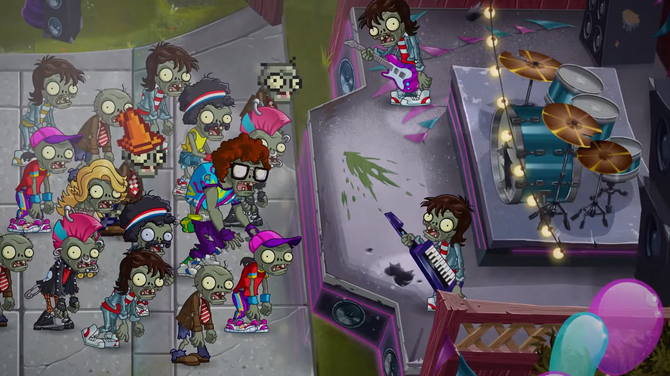 Complete Dark Ages
Neon Mixtape Tour is the 8th world (9th world released chronologically) in Plants vs. Zombies 2 released with the 3.9.1 update. It was soft released on August 20, 2015, and officially released on August 25. Cactus and Electric Blueberry are the premium plants released alongside this world for Part 1 and Part 2 respectively showcased in the teaser parties.

Despite appearing to be a nighttime world like Dark Ages, sun still falls from the sky and the levels themselves are called days.

This world takes place in the 1980s when there were a lot of bands representing a variety of musical genres, such as pop, punk, or metal. Jams, the environment modifier of this world, represent that variety through gameplay (more info below). Crazy Dave also claims to remember this period from when he was a kid.

Stock up on hairspray and rewind to the 1980s! With synthesized music and voraciously radical zombies, this heinous party will, like, totally tax you to the MAX!

After beating Day 15, Crazy Dave mentions that someone has passed him a note that says to meet behind the bike racks at lunchtime for a funderful surprise. On Day 16, Dr. Zomboss writes a note before a huge zombie attack.

On Day 32, Dr. Zomboss references the Rick Astley song "Never Gonna Give You Up ", which became a popular Internet meme known as rickrolling. He then attacks the player with his Zombot Multi-stage Masher. After the level is beaten, Penny exclaims that it was close and fears that they only hit pause on Dr. Zomboss's heinous deal. Dr. Zomboss says that the next verse will be the same and yet worse and goes to when the player cannot imagine.

Jam is the main gimmick of Neon Mixtape Tour that changes the music of the gameplay at any time. Different from other worlds, the music will make the zombies move faster or slower, and also make special zombies, who are Punk Zombie, Glitter Zombie, MC Zom-B, Breakdancer Zombie, Arcade Zombie's arcade machine, and Hair Metal Gargantuar, exhibit their special ability. They will only exhibit their special ability if their preferred music or jam is playing. There are six jams in total.