Charge up shots to jinx enemies, causing them to take extra damage

Super Rare
Nec'Rose wields the energy of vanquished plants through an ancient art known as necro-plant-cy by which she renders the defenses of zombies useless. She also likes smoothies, long walks on the beach, and her favorite color is purple.

Nec'Rose is a Super Rare variant of Rose in Plants vs. Zombies: Garden Warfare 2 which was added in the Frontline Fighters DLC. Her special ability is that she can charge up her weapon and "jinx" the zombie that gets hit by the charged shot. That zombie is then debuffed and will take 75% more damage.

Nec'Rose wields the energy of vanquished plants through an ancient art known as necro-plant-cy by which she renders the defenses of zombies useless. She also likes smoothies, long walks on the beach, and her favorite color is purple.

​Nec'Rose can 'jinx' Zombies with a charged up shot, causing them to take extra damage!

Nec'Rose's primary weapon is the Staff of Jinxing. It is a chargeable and semi automatic weapon that deals 6.5 damage if uncharged and 15 damage if charged. A charged shot takes away four ammo from her clip. If the zombie is hit with a charged shot, the zombie will be "jinxed," causing it to take 75% extra damage.

Like most Roses, Nec'Rose makes a great assist class. Though the Nec'Rose's damage when fully charged only does 15 damage, it makes them extremely vulnerable. It is advised to stay near a group of plants and do what you do best. Charge up and strike a zombie. Do this because Nec'Rose's fully charged attack depletes the defense of enemies, making it so other plants can do much more damage to a zombie. A strategy for Herbal Assault is to stay behind and shoot zombies in the graveyard from a distance. This makes it much easier for plants to get rid of the zombies and take over the graveyard. Try to start attacking a Zombie with a fully charged shot. You aren't capable of doing much damage without doing so. A good idea is to use hit and run strategies, jinxing a few zombies in a group, then using Time Snare or Arcane Enigma to make a getaway, and rack up the Jinx assists and shared vanquishes. In any objective based gamemode, try to jinx as many Zombies as you can see. This makes it ridiculously easy for your teammates to finish them off. 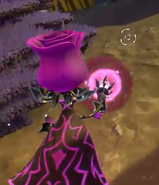 Nec'Rose charging up a shot 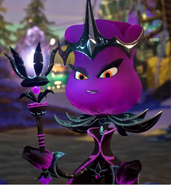 Nec'Rose in the Frontline Fighters trailer 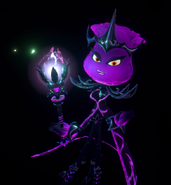