Start of Tricks: Transform this into a random zombie that costs 2

or less.
"Mommy, where do little Zombies come from?" Asked and answered.
Mystery Egg is a colossal uncommon zombie card in Plants vs. Zombies Heroes and a member of the

. It can also be made by Hippity Hop Gargantuar.

It does not have any traits, and its ability transforms it into a random zombie that costs 2

or less, including another Mystery Egg, at the start of the Zombie Tricks phase on the turn it is played. Its closest plant counterpart is Seedling.

It was introduced in update 1.12.6, along with Hippity Hop Gargantuar.

It is based on an Easter egg, a decorated egg usually used around the time of Easter.

Its name is a combination of "mystery," referring to its random ability, and "egg," the object it is based on.

"Mommy, where do little Zombies come from?" Asked and answered.

Similar to Summoning, although it can give powerful zombies like Toxic Waste Imp and Barrel of Deadbeards, it may also give weak ones like Skunk Punk or ones that don't synergize with your deck such as Gargologist in a non-Gargantuar deck or Zookeeper/Cat Lady in a non-pet deck.

But most of the time, this zombie is used to block an attack of a dangerous plant since unlike Swabbie, it cannot attack on its own, and while it does have its tribe synergy with Cheese Cutter and King of the Grill, it is very minor and does not help its stats either.

However, if you choose to ensure that this zombie stays alive, it can reward you by turning into a zombie that could aid you. You could either hope your opponent doesn't play anything strong enough to destroy it, or play stat-boosting cards such as Yeti Lunchbox and Camel Crossing to boost its stats, but since the non-environmental boosts will be gone once Mystery Egg transforms into another zombie, it is not recommended to do so unless you urgently need it.

As Professor Brainstorm, you can ramp up very easily with this and Medulla Nebula. When you play this in Medulla Nebula, you will earn 1 extra brain and once Mystery Egg transforms, you will get another 2 brains, ramping up to 3 brains in a single turn. This allows you to play Gargantuars' Feast as early as turn 9.

Here is the list of zombies it can transform into:

Statwise, this is a weak zombie. However, do not play anything important on its lane, for you may end up facing a dangerous zombie. It is best to get rid of Mystery Egg before the Zombie Tricks phase. Play cards that can either hurt or destroy this zombie before reaching the Zombie Tricks phase, such as Whack-a-Zombie, Berry Blast, and Chomper.

You can also Bounce this zombie if you have no other way to prevent it from transforming. But in the later rounds, most zombies will not be strong enough to pose a threat to you, so it may be better to focus on other zombies instead of Mystery Egg. 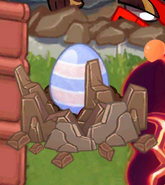 Lawnmower being used on Mystery Egg