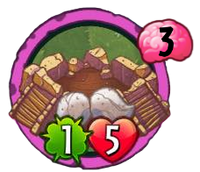 Fusion: A Zombie played on this does a Bonus Attack.
If Neptuna's Triassic Invasion force can align all of Hollow Earth's Mustache Monuments at once, she will become truly unstoppable.
Mustache Monument is a triassic rare zombie card in Plants vs. Zombies Heroes and a member of the

. It does not have any traits, and its Fusion ability makes the zombie played on it do a bonus attack.

It is based on a monument, a type of structure, usually three-dimensional, explicitly created to commemorate a person or event, or which has become relevant to a social group as a part of their historical or cultural heritage, specifically the ruins of a Mesoamerican pyramid.

Its name is a combination of "mustache," referring to the stone mustache on it, and "monument," the real-life object it is based on.

If Neptuna's Triassic Invasion force can align all of Hollow Earth's Mustache Monuments at once, she will become truly unstoppable.

As a fighter, Mustache Monument is only a bulky low-strength zombie. However, its Fusion ability is the key strength of, or even everything about this zombie. Mustache Monument's high health allows it to live most things thrown at it, meaning that it necessarily dosen't have to be played on the same turn as the zombie you are planning to play on it, unless your opponent is using a heavy damage or instant-kill deck.

While Lurch for Lunch does the same thing, you don't have to use those brains to do so on the same turn you play your zombie, meaning that you can play your key threats and make them do a bonus attack much earlier. However, Lurch for Lunch is cheaper and better in a trick-based deck.

But aside from its rather lacking synergy, there isn't any big downside to Mustache Monument aside from its ability being countered hard by Wing-Nut. Fortunately, Wing-Nut cannot stop a zombie's bonus attack before turn 4 unless extra sun has been made.

Not only is Mustache Monument's Fusion ability dangerous, Mustache Monument itself is also not easy to remove. 5 health on turn 3 means that not too many combinations can destroy or nullify it on the same turn. While your opponent may not play a zombie on the very next turn, keeping Mustache Monument alive for long is not a wise move in general, as your opponent may play threats like Shieldcrusher Viking, Kitchen Sink Zombie, or even a high-strength Valkyrie later, which will surely weaken, if not defeat you.

For superpowers, Goatify, Devour, Tater Toss, and Transmogrify work well against it, although there will be better zombies to play them on later in the game. Therefore, playing damaging or instant-kill tricks is better, the best option being Whack-a-Zombie. However, the top counter for Mustache Monument, just like any other bonus attack card, is Wing-Nut. 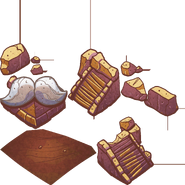 Mustache Monument tinted gray due to a glitch

Transmogrify being played on Mustache Monument