When you play a Plant here, make a 1

Puff-Shroom with Team-Up in another random lane.
Sometimes beautiful things grow out of the darkest places. Ponder that for a few moments.
Mushroom Grotto is a galactic uncommon plant environment card in Plants vs. Zombies Heroes, and a member of the

to play, and its ability makes a Puff-Shroom on another random lane when a plant is played in it, unless all other non-aquatic lanes are occupied by two plants.

Sometimes beautiful things grow out of the darkest places. Ponder that for a few moments.

While Mushroom Grotto makes Puff-Shrooms, which are very weak plants, the true strength of this environment is the sheer number of Puff-Shrooms it can make.

Since making plants counts as playing them, Astro-Shroom, Muscle Sprout, and Go-Nuts are able to activate their ability multiple times, making them (and the Puff-Shrooms too in the case of Go-Nuts) very big threats.

Other examples of plants that synergize well are those whose ability becomes more effective when there are more plants on the field. Such examples are Buff-Shroom and Pineclone, who are able to make the Puff-Shrooms this environment more powerful. You can take it one step further and play Molekale, resulting in a ton of 5

plants on the field. If you think your opponent will try to wipe the Puff-Shrooms or this environment off, Punish-Shroom will severely penalize your opponent. Since Puff-Shroom has Team-Up, you should have no problem filling the field.

To make more Puff-Shrooms at once, play plants that can make Team-Up plants like Pair of Pears or Shroom for Two because they can make two Puff-Shrooms in random lanes compared to only one. That way, you can fill the field faster. If multiple Mushroom Grottos are present, it is possible that a Puff-Shroom will spawn on a grotto, therefore activating its ability and causing a chain reaction. To make this happen faster, occupy the height lanes.

However, you have to be careful against Supernova Gargantuar as it can destroy all of your Puff-Shrooms made from the environment very easily.

Since Puff-Shrooms are weak with only 1

, try to play area of effect instant-kill or damaging cards, like The Chickening, Weed Spray, Barrel of Deadbeards, or Fireworks Zombie. However, playing any of those when Punish-Shroom is on the field is not a good idea. Supernova Gargantuar is much more expensive, but can easily take over all of the Puff-Shrooms made from the environment. You can also replace this environment with one of yours to prevent the plant hero from making swarms easily. Extinction Event is also a good card to use as it is cheap and you can use it after they swarm the field with Puff-Shrooms.

Mushroom Grotto's statistics after being Conjured by Cosmic Mushroom 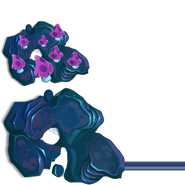 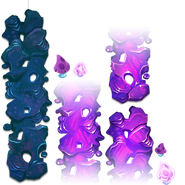 Three Mushroom Grottos in the mulligan section with a Berry Blast

Mushroom Grotto's statistics after being Conjured by Photosynthesizer