Anti-Hero 2.
Do 2 damage to a Zombie there.
Night Cap and his mushroom friends are not to be truffled with.

Mush-Boom is Nightcap's premium legendary plant signature superpower trick card in Plants vs. Zombies Heroes and a member of the

to play, and its ability makes a Poison Mushroom on a selected lane and does 2 damage to a zombie on that lane.

Its name is a combination of the words "mushroom," the fleshy, spore-bearing fruity body of a fungus, and "boom," a loud, deep, resonant sound.

Its description has a pun: "truffle" (a type of mushroom), instead of "trifle" (to act with disrespect towards).

Night Cap and his mushroom friends are not to be truffled with.

If you get this trick at the beginning of the game, it is recommended to use it immediately, as most zombies that cost 1 brain are easily destroyed by this trick. If that zombie is destroyed, the Poison Mushroom made by this trick can land a hit on your opponent.

However, if your opponent does not send out a zombie on the first turn (or if the zombie played is Zombology Teacher), beware, as they may be saving their brain for a trick like Bungee Plumber, which can easily destroy Poison Mushroom. It is also a bit of a waste since its ability can only do damage to a zombie fighter and not to your opponent directly.

In the mid to late game, try not to choose lanes where Mush-Boom's ability cannot destroy the zombie on it, as Poison Mushroom loses their usefulness without its

Anti-Hero boost. But even then, you should have other plants that can do better than Poison Mushroom, so it may not be a bad idea to play this trick on a lane with a zombie with up to 3 health and, sequentially, destroy it.

Unless you need to block the lane for a turn, do not use this against Knight of the Living Dead or shielded zombies, as they are immune to both the 2 damage and Poison Mushroom's attack.

In the early game, it is recommended to save your brains (unless you have Bungee Plumber, Nibble, Rolling Stone, or any damaging superpower), because if you use your brains to play a zombie, Mush-Boom will destroy that zombie, causing you to lose both that zombie and 3 health unless the zombie is either Headstone Carver, Quickdraw Con Man, Iron Boarder, or Cat Lady, although your opponent can play it on an empty lane instead. Stalling your opponent and giving them no clear opportunity to safely play this trick works in your favor, as Mush-Boom's effectiveness diminishes when you can play zombies that Mush-Boom cannot destroy.

Of course, you can also just take 3 damage on the first turn and retaliate next turn.

AI opponents usually use this almost instantly even if there are no zombies on the lawn, giving you an advantage if you have damaging tricks. 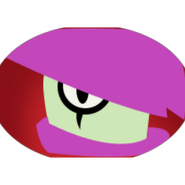 The dragon that appears during Mush-Boom's animation

Textures of the dragon
Add a photo to this gallery

Mush-Boom's statistics, note that it was called Toadstool Takedown

Mush-Boom animated
Add a photo to this gallery

Retrieved from "https://plantsvszombies.fandom.com/wiki/Mush-Boom?oldid=2056039"
Community content is available under CC-BY-SA unless otherwise noted.