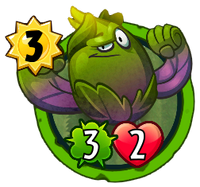 when you play a Plant.
"Can you spot me, bro?"
Muscle Sprout is a premium legendary plant card in Plants vs. Zombies Heroes and a member of the

every time a plant is played or made. This ability stacks with each Muscle Sprout on the field and persists until all Muscle Sprouts are removed from the field. Its closest zombie counterpart is Unlife of the Party.

It is based on a brussels sprout, a vegetable known for its edible buds.

Its name is a portmanteau of "muscle," referring to its flexing animation (commonly used to show off one's own muscles), and "brussels sprout," the real-life plant it is based on.

Its description is a reference to the phrase "spot me," which is used by weightlifters to ask someone to observe themself while lifting weights, as a safety measure in case the weight the weightlifter is lifting falls onto the weightlifter.

Muscle Sprout's base stats are not good for a 3-sun legendary plant, but its ability allows its stats to grow massive with enough support.

Due to the nature of its ability, cheap plants, and more importantly, Team-Up plants are recommended when it comes to boosting Muscle Sprout. But since the Mega-Grow class itself lacks such plants, you will have to use plants in other classes. While every other class has a good number of Team-Up plants, the

Kabloom class (Captain Combustible) would be best due to its speciality in rushing (Mushroom Grotto, Puff-Shroom, etc.). But beware, as an unplanned rush leaves both the offense and defense to Muscle Sprout alone, leaving you with very little if your opponent managed to destroy said Muscle Sprout. Aside from cheap plants, plants that make more plants, such as Shroom for Two, Pair of Pears, and Poppin' Poppies are also effective, as the plants made count towards Muscle Sprout's ability.

When its strength reaches 4 or above, watch out for instant-kill tricks like Rocket Science or Cut Down to Size.

Destroying this plant can be a struggle, as it will get stronger and tankier as your opponent plays more plants. If this is played early, try to destroy it before your opponent boosts it too much. If it is played later in the game, however, your opponent will be able to boost it many times without interruption. In that case, play an instant-kill like Locust Swarm or Rocket Science, or block it with an expendable zombie if needed, preferably one with the

Deadly trait like Smelly Zombie. As a last resort, Bounce Muscle Sprout to reset its stats.

Also, since Muscle Sprout synergizes well with Potted Powerhouse, there is a good chance your opponent may lead up with one after Muscle Sprout. Therefore, try not to spend too many cards on destroying Muscle Sprout.

Retrieved from "https://plantsvszombies.fandom.com/wiki/Muscle_Sprout?oldid=2299306"
Community content is available under CC-BY-SA unless otherwise noted.