None
Whether you're looking to roast marshmallows, or some pesky weeds, Mr Toasty's got your back.
Mr. Toasty is a Rare bot in Graveyard Ops, Herbal Assault, and Backyard Battleground as a defense against the plants, in this sense, it is similar to the Zombot Turret.

Its attack is named Toasty Flame, it sprays a stream of fire at plants to deal constant damage that burns them for a short time.

It was first shown in a teaser by PopCap and was later seen in gameplay videos of Plants vs. Zombies: Garden Warfare 2. It is the zombie equivalent to the Snap Dragon.

CLOSE RANGE: FIRE
Whether you're looking to roast marshmallows, or some pesky weeds, Mr Toasty's got your back.

Multiple Mr. Toasties as seen in the L.E.A.F. transmission video 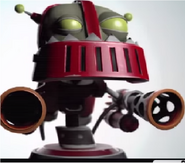 Another Mr. Toasty in the L.E.A.F. transmission video 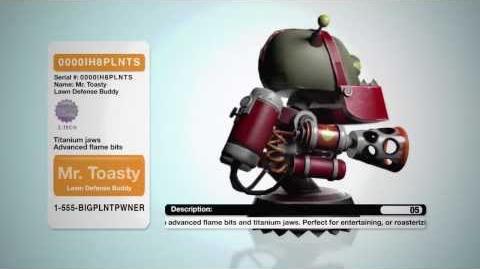 PvZ A Transmission from L.E.A.F.
The video in which Mr. Toasty was revealed