Mr. Freezy's patented Brainz Freeze machine is delicious and refreshing.
Mr. Freezy is a bot in Plants vs. Zombies: Garden Warfare 2. It can be spawned in Graveyard Ops, Herbal Assault, and Backyard Battleground as a defense against the plants.

It is the zombie version of the Ice Peashooter, as it will fire slowing snowballs at plants. It was first revealed in the E3 gameplay by mistake when a player selected it for a split second.

Its attack is named Freezer Burn. It fires one shot every half a second three times before reloading, and each shot does 10 damage while slowing opponents. Five successive shots will freeze the target.

Its name is possibly a reference to the villain Mr. Freeze from the Batman franchise. 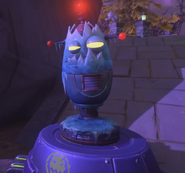