5 min.
Shoots high voltage lightning bursts that arc to nearby targets.
Mr. Electro is a spawnable bot in Plants vs. Zombies: Garden Warfare 2 and Plants vs. Zombies: Battle for Neighborville which can be built in Graveyard Ops, Backyard Battleground, Flag of Power, and Herbal Assault.

It fires a beam that deals electric damage to a plant and chains the damage to other nearby plants. Its attack is named Electric Strike, dealing 20 damage. It is the zombie counterpart of the Lightning Reed.

It has a Lawn of Doom variant named Mrs. Frankenstorm. It resembled a Mr. Electo bot made to look like the Bride of Frankenstein, and was exclusive to seasonal Lawn of Doom stickerpacks. Despite its unique appearance, it was functionally identical to the default Mr. Electro and had the same health and damage stats.

Shoots high voltage lightning bursts that arc to nearby targets. 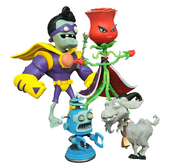