When played on Heights: This gets +2

.
She's climbed 'em all: Everest. K2. Your house.
Mountain Climber is a premium uncommon zombie card in Plants vs. Zombies Heroes and a member of the

Bullseye trait, and her ability gives her +2

when she is played on the heights. Her closest plant counterpart is Skyshooter.

She is based on a mountain climber, a person who participates in Mountaineering.

Bullseye trait. While the sacrifice is certainly considerable, Mountain Climber's lack of the dancing tribe makes her a strictly worse choice in Professor Brainstorm's dancing decks, as she does not benefit from the abilities of Aerobics Instructor and Flamenco Zombie unlike Drum Major does.

However, unlike Drum Major, if you do play her on the heights lane, having 4 strength with

Bullseye is usually better as she does a fifth of your opponent's health and prevents them from blocking. Additionally, it moves Mountain Climber out of range from Whack-a-Zombie and Lawnmower, making her very hard to remove. Combined with other dangerous zombies, you can stress your opponent easily.

Still, because she is a sports zombie, she retains her usefulness in Rustbolt decks, and is able to be boosted by zombies such as Team Mascot and Zombie Coach like Drum Major can. Due to her trait, you may give her Lurch for Lunch to make her do extra damage to your opponent without filling their Super-Block Meter.

However, Rustbolt Sports deck have better options such as Arm Wrestler or Drum Major.

Mountain Climber will most likely be played on the heights lane, so prepare a plant to destroy this. Using tricks helps with destroying this zombie. Beware of this zombie's

Bullseye trait, as she will not fill your Super-Block Meter. A quick counter to a turn 4 Mountain Climber is Skyshooter; regardless of placement, he will be able to make an exchange (or even live the attack with other pea synergy plants around).

Also, beware of Team Mascot, as he can boost Mountain Climber, and Zombie Coach, as Mountain Climber will then be immune to damage. If those don't work, using instant-kill cards such as Squash, Shamrocket and Doom-Shroom also works, but beware that the latter can also destroy your stronger defenses. 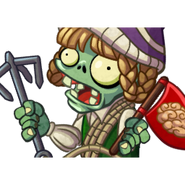 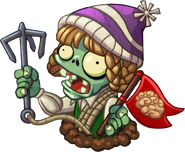 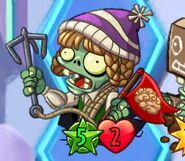 Mountain Climber with a star icon on her strength 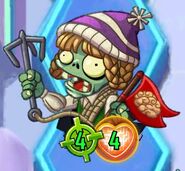 Gigantic Mountain Climber due to a glitch 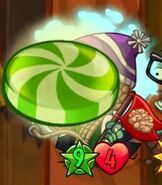 Escape through Time being played on Mountain Climber

Mountain Climber on the advertisement for the Gold Medal Pack 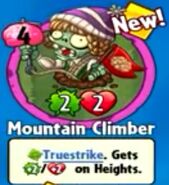 The player receiving Mountain Climber from a Premium Pack

The player receiving Mountain Climber from a Premium Pack before update 1.6.27 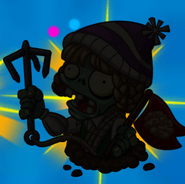 The player receiving Mountain Climber from a Premium Pack