Morticulturalist is an unlockable achievement on the PC, iOS, Android, and Nook versions of Plants vs. Zombies. It is worth 30 points on Game Center. To get this achievement, the player must beat Adventure Mode and buy all the upgrade plants and the Imitater from Crazy Dave's Twiddydinkies. To buy all the upgrade plants and the Imitater, the player will need $98,000 total. To make that much money, see Money guide. On the Steam icon's image, Sunflower is winking, just like the one at the end of "Zombies on Your Lawn."

In the Xbox Live Arcade version, this achievement is called Master of Morticulture.

It could also be a portmanteau of "multiculturalist," a term used to refer to someone or something which has aspects of many cultures, referencing the fact that the player is collecting many plants, and the Latin root "morti," which relates to death and could be a reference to the fact that to get this achievement, they have to beat Adventure Mode, seeing almost every zombie. 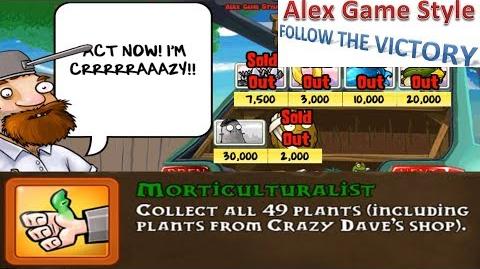