Button Mushrooms in random lanes.
One good mushroom deserves another.
More Spore is a super-rare plant superpower trick card in Plants vs. Zombies Heroes and a member of the

to play, and its ability makes two Button Mushrooms on random lanes. Its zombie counterpart is Dance Off.

Its description is a reference to the popular idiom "one good turn deserves another."

One good mushroom deserves another.

This trick is a good way to fill the lanes with mushrooms quickly for Buff-Shroom, Punish-Shroom, Muscle Sprout, and Astro-Shroom's abilities, or to make profit with transforming cards like Pineclone and Petal-Morphosis. But although many strategies for optimizing this card exist, many require larger amounts of sun or up to three cards, making them strong in theory but in practice rather impractical.

As such, even if this card has good synergy with your deck or you are assembling a combo, it is generally recommended to simply play this card as soon as possible for the best chance of making a meaningful impact on the field without any problems. Do not hold onto this card too long, or you will end up wasting time and losing out on any possible impact.

Be careful when playing against a

Beastly hero, especially if you notice they are running multiple

Frenzy zombies. Most zombies with

Frenzy will simply destroy Button Mushroom, then attack again to hurt you. Vimpire and Ancient Vimpire (for the latter, any

Frenzy zombie is also included) in particular are dangerous as they get stronger after destroying the Button Mushroom. Even outside of

Frenzy zombies, Immorticia and Brain Freeze have access to Acid Rain, a trick capable of destroying your Button Mushrooms at once.

Against Impfinity, if he does not play anything on the Zombies Play phase on turn 1, you can play this straight away to basically discourage a possible Triple Threat coming; most opponents will hold back on playing Triple Threat, a powerful source of early-game impact, since they do not want to risk the Impfinity Clones being made on the same lanes as the Button Mushrooms.

Due to Button Mushroom not having Team-Up, it is a bad idea to use this when there are less than two lanes that are empty. The only exceptions are when you need to block a strong zombie and use the Button Mushrooms for Evolution.

If you go later into the game, this superpower's worth diminishes due to the Button Mushrooms taking up space where your stronger plants could be played instead. Be sure to avoid playing this card if you know you need (or will need) the space to play more impactful plants.

This will not benefit your opponent unless they are going for a rush deck, which will cause either some of your zombies to be low on health or have you take plenty of damage. If the plant hero uses this on the first turn, it is possible that you will have to accept taking 2 damage unless you have a zombie in one of the Button Mushroom's lanes, or tricks such as Bungee Plumber and Nibble to take out at least one of them.

While tricks like those work, Missile Madness will take them both out. You could also use Extinction Event, but it isn't worth using it on Button Mushroom in general, and you will have to wait until the next turn. 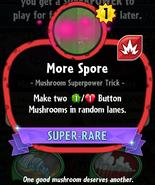 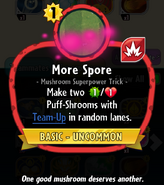