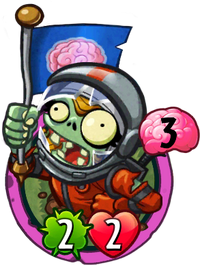 When played on Heights or an Environment: This gets +2

.
That's one small nibble for Zombies, one giant bite for Zombiekind.
Moonwalker is a galactic uncommon zombie card in Plants vs. Zombies Heroes and a member of the

. It does not have any traits, and its ability gives it +2

when it is played on a heights lane or in any environment.

It is based on an astronaut, a person trained by a human spaceflight program to command, pilot, or serve as a crew member of a spacecraft.

Its name and dancing tribe are references to the moonwalk, the signature move of Michael Jackson. It could also be a reference to Michael Jackson's Moonwalker, a collection of short films about Jackson, several of which are long-form music videos from Jackson's Bad album.

Its description is a reference to the quote made by Neil Armstrong upon setting foot on the Moon. The quote goes: "That's one small step for man, one giant leap for mankind." However, the description's use of the words "nibble" and bite" refers to how zombies eat brains.

This zombie is a much more flexible version of Mountain Climber as its ability also activates when it is played in an environment regardless of what side it is on, with the only difference of not having the

Bullseye trait. In addition, it costs 1

less than Mountain Climber. Overall, if you are running a deck with environments, this zombie can cause trouble to your opponent from the early to mid game.

This zombie also works well in science decks. It synergizes with Zombot Drone Engineer, who boosts its strength each time it does damage, Gadget Scientist, who can make its do a bonus attack, and Interdimensional Zombie, who activates his ability when Moonwalker is played.

Professor Brainstorm can use Moonwalker in his dancing decks, where it counts towards Flamenco Zombie's and Headhunter's abilities and gets boosted by Aerobics Instructor.

Moonwalker works well with missions with many heights lanes like A Shadow Falls. On the other hand, this also means that it should not be used on missions without height lanes like Kick Grass! unless you have environments as it will not be able to gain a boost.

Super Brainz and Huge-Gigantacus can synergize it with Graveyard and Headstone Carver - since Graveyard is an environment and it makes all zombies played there gravestones, the Headstone Carver will be able to boost it. This results in a massive +4/+3 boost for it.

However, as Rustbolt, Mountain Climber is generally a better option if you are using a sports deck, or if you don't have any environments in your deck. 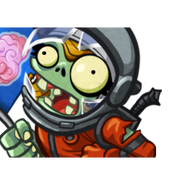 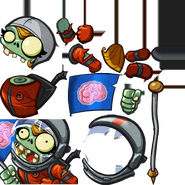 Moonwalker on the background of the Galactic Gardens battlefield

Shamrocket being used on Moonwalker

Moonwalker with a star icon on its strength 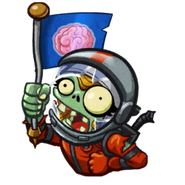