When this does damage, shuffle two Magic Beanstalks into your deck.
She and Sunflower are besties. It's just too bad their schedules make it hard for them to get together.
Moonbean is a galactic super-rare plant card in Plants vs. Zombies Heroes, and a member of the

. She does not have any traits, and her ability adds 2 Magic Beanstalks into the plant hero's deck every time she does damage.

She is based on a bean, a common name for large seeds of several genera of the flowering plant family Fabaceae; and the Moon, an astronomical body that orbits planet Earth, during its waning crescent phase.

Her name is a combination on "moon," the real-life astronomical body she is based on; and "bean." It may also be a pun on "moonbeam," a ray of moonlight.

Her ability to add Magic Beanstalks may refer to the beanstalk in the popular English fairy tale Jack and the Beanstalk, which grew during the night. It also may reference the term "once in a blue moon", referring to the beanstalks coming out rarely.

Her description mentions Sunflower. It may allude to how the Sun and the Moon cannot be seen at the same time under normal circumstances except for a solar eclipse. It may also allude to the fact that the two plants are in different classes and therefore can only be used in tandem when Chompzilla is used.

She and Sunflower are besties. It's just too bad their schedules make it hard for them to get together.

While Moonbean has high health for 3-sun plant, her strength is pretty average. However, her ability is what makes this really shine.

In order to optimize the amount of Magic Beanstalks being added to your deck, bonus attacks are very effective in tandem with this plant. The easiest ways get her to do bonus attacks turn after turn would be with a Coffee Grounds.

Since she is a bean plant, Green Shadow can make use of her to apply pressure to her opponent by combining her with Admiral Navy Bean and Bean Counter. She can also be useful as you can use Plant Food or Espresso Fiesta to make Moonbean do Bonus Attacks, and this will resulted in more Magic Beanstalks shuffled and increasing the chances of getting them. Moonbean can also be Conjured by Cosmic Bean, then boosted by Go-Nuts for immunity to Weed Spray, Rolling Stone, and Rocket Science, although The Smash's Slammin' Smackdown is one thing to worry about.

Grass Knuckles can play her more safely, as three of his superpowers, Time to Shine, Power Pummel, and Root Wall, are ideal for letting Moonbean survive longer. He can also protect her with Team-Up plants, play Force Field or boost her health with Photosynthesizer and Grape Responsibility to let Moonbean attack for as many turns as possible, as long as she doesn't get instantly destroyed or have her strength reduced to 0.

Chompzilla can heal her with 2nd-Best Taco of All Time and Geyser so that she doesn't lose health overtime. She can also give her the Strikethrough trait via Sun Strike in order to activate her ability twice, thus getting free chances of getting more Magic Beanstalks.

Captain Combustible, on the other hand, is a bit of a slouch, as his Kabloom cards have no synergy with Moonbean. However, he can boost her strength with Berry Angry and Blazing Bark or play damaging tricks like Berry Blast and Meteor Strike to destroy zombies before they attack Moonbean. But statwise, Time to Shine and Plant Food always work best.

You can also give her the Untrickable trait via Umbrella Leaf to prevent her from getting killed by Weed Spray and Rolling Stone so she can shuffle more Magic Beanstalks and there are higher chances of getting them.

Beware of instant-kill tricks like Weed Spray or Rolling Stone. While you can boost her strength to give her immunity to the aforementioned tricks, Rocket Science can destroy her if her strength goes over 3.

As stated before, you may want to destroy her with Weed Spray or Rolling Stone before the entire field is filled with Magic Beanstalks. If Moonbean's strength goes out of control, try to play Rocket Science. Exploding Fruitcake can also take her out in one hit provided that her health is not boosted.

The Magic Beanstalks she shuffles can be devastating if not destroyed quickly. Since they are shuffled as cards, you cannot do anything to them before being played. Supernova Gargantuar can be used to destroy all the Beanstalks at once, but you have to beware of Molekale in this case, provided you are facing Captain Combustible.

As any Hearty Hero, you can play Escape through Time, Trash Can Zombie or cards that have "Can't be hurt" ability in a lane with Moonbean to avoid two Magic Beanstalks from being shuffled. It is also recommended to nullify her ability with Knight of the Living Dead. Since he has the Armored 2 trait, he won't take any damage, thus preventing her from shuffling Magic Beanstalks. Alternatively, you can also reduce her strength to 0 using cards such as Landscaper, Shrink Ray, Alien Ooze, or Stupid Cupid.

You can also play a Gravestone zombie in front of her in order to prevent her ability from happening. As any Sneaky hero, you can also hide that zombie in a gravestone with In-Crypted, Mixed-Up Gravedigger, or Cursed Gargolith. In most certain cases however, beware of Grave Buster, provided you are facing Grass Knuckles.

Do not Bounce this unless necessary because your opponent can play her again when they need to draw more cards, especially against Green Shadow if she has Bean Counter and Admiral Navy Bean on the field. 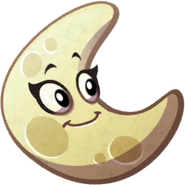 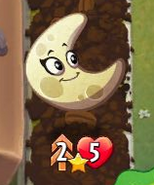 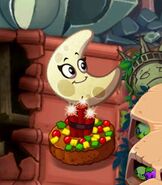 Exploding Fruitcake being used on Moonbean

Evaporate being used on Moonbean

Rolling Stone being used on Moonbean.

Plant Food being used on Moonbean.