For the map in Plants vs. Zombies: Garden Warfare 2, see Moon Base Z.

Overshoot 3.
Zombies landed on the Moon? Many believe it's nothing but a conspiracy theory, and yet, here's the proof.
Moon Base Z is a galactic super-rare zombie environment card in Plants vs. Zombies Heroes and a member of the

to play, and its ability gives a zombie in it the

Overshoot 3 trait. This ability persists until Moon Base Z is overridden by another environment.

It is named after the map in Plants vs. Zombies: Garden Warfare 2 with the same name.

An Uplink Bot is seen on this card. This may be referencing how both the Uplink Bot and

Overshoot trait bypass everything in their way and hit their target.

Zombies landed on the Moon? Many believe it's nothing but a conspiracy theory, and yet, here's the proof.

This environment will allow the zombie here to do at least 3 damage to the plant hero most of the time, regardless of whether there is a plant in that lane or not in a similar fashion to Disco Dance Floor (which has no base strength either). This includes zombies with no base strength like Cat Lady and Barrel of Deadbeards.

Bullseye zombie or Disco-Naut, which will guarantee the 3 damage not be blocked by your opponent before combat. Be aware, however, as zombies that already have

Overshoot 2 will have it replaced with

Overshoot 3, not added onto it.

Since this is a science environment, Professor Brainstorm can use this with Interdimensional Zombie to transform him, and even after transformation, the resulting zombie will still have the

This environment becomes dangerous if your hero is low on health, especially if a zombie has an ability that activates when they hurt the plant hero, or the

Bullseye trait. If possible, try to remove this environment immediately with one of your own, or destroy any zombies that benefit from hurting you directly. However, you will not be able to react to it on the turn it is played. Therefore, you can only remove it the next turn.

Moon Base Z's grayed out card 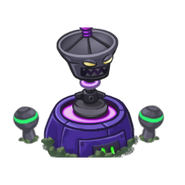 Moon Base Z on the field, alongside Mushroom Grotto and Venus Flytraplanet

Gigantic Moon Base Z due to a glitch