Pulls out the Monkey King Bar and attacks the nearest zombie, causing damage to all zombies within the range

"Great Saint, Victor of Buddhas, Monkey King..." Monkeyfruit wants to put all of his names out to represent himself. However, reality is cruel, as in the eyes of the zombies, he's just an edible fruit... That's all...

Monkeyfruit (猕猴桃; pinyin: míhóutáo) is a monthly special plant in the Chinese version of Plants vs. Zombies 2. He attacks by throwing his staff at zombies, which stops when it hits one, and spins for a few seconds, damaging all zombies on that tile. When upgraded, his staff spins around for a longer amount of time.

This plant is based on the golden kiwifruit (Actinidia chinensis). His name, in Chinese, however, is a pun, as the word '猕猴' in its name '猕猴桃' means macaque, a genus of monkey famous in China.

His appearance, according to the aforementioned monkey resemblance, is a reference to Sun Wukong, also known as the Monkey King, originating from the old Chinese classic folk tale Journey to the West, who wears a golden headband and attacks with a golden staff. His costume and appearance, along with his idle animation, and its Level 5 ability of summoning minions from his hairs, further referencing Wukong's abilities in the tale.

When given Plant Food, Monkeyfruit gets a giant Monkey King Bar and smashes zombies in a range of five tiles in front of him.

Monkeyfruit will now smash zombies twice and stalls them in the ground for a while.

Monkeyfruit is a tough plant to use at level 1, as he is very slow.

However, he becomes much more powerful at level 2 and 3, as he can deal much more damage than he does originally. It is recommended to upgrade to higher levels as soon as you can. Level 5 is optional because it does only a little bit more damage than level 4.

Monkeyfruit can do crowd damage so it is recommended to plant more of them to accumulate the power.

At level 3, he induces a slowing effect that can stack with fire-based plants, so he can be used alongside them. During boss battles, his staff can also slow them down, as bosses are immune to being chilled. 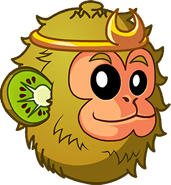 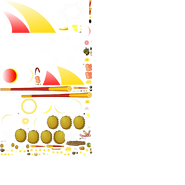 Monkeyfruit on a Gold Tile 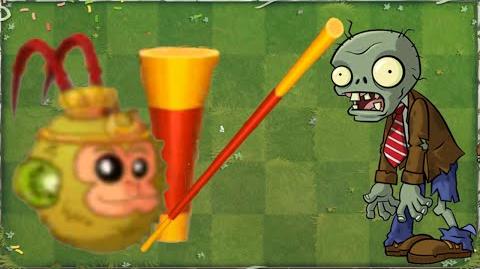 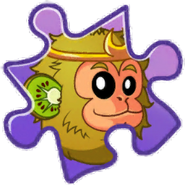 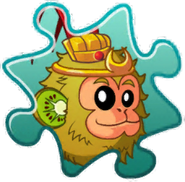 Monkeyfruit in the version 1.9.1 title screen

Monkeyfruit in an advertisement for a boss event 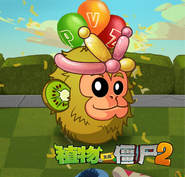