When revealed: Steal 2 sections from the Plant Hero's Super-Block Meter.
Piracy is serious monkey business.
Monkey Smuggler is a triassic uncommon zombie card in Plants vs. Zombies Heroes and a member of the

It is based on a smuggler, a person who performs the act of smuggling, the illegal transportation of objects, substances, information, or people, as well as Space Pirate, who was used as a base for Monkey Smuggler's design.

Its description is a play on the term "monkey business," an act that is considered silly or time-wasting, but with separate emphasis on the two words as Monkey Smuggler's monkey is doing the "business".

As an early-game play, Monkey Smuggler has decent stats along with a good ability. While its strength is average, it has a good amount of health, which is high for a turn 2 zombie, especially for those in the

Sneaky class. Since it also has the Gravestone trait, it is immune to damaging tricks and bonus attacks until revealed.

Monkey Smuggler's ability is even more useful, as it helps you block more easily while hindering your opponent from doing the same thing. While this ability activates only once unlike Mars Flytrap's, it triggers when revealed, so you only need to ensure that he makes it before the tricks turn begins. You can use this aspect and use Monkey Smuggler for Evolution, as you won't have anything to lose.

Or, you can Bounce it or use Mixed-Up Gravedigger to activate its ability again. As a rule of a thumb, the Super-Block meter will only charge up to 3 segments at a time. so if your opponent has 5-6 sections filled, Monkey Smuggler can easily deny them a block and make way for a bigger hit, such as safely finishing them off via Final Mission when playing as Impfinity or simply letting in as much damage as possible.

Monkey Smuggler is also a good pet in a pet deck, as it has good health to begin with, combined with its cost and the Gravestone trait. However, only Brain Freeze is able to pull off such combos.

It has a great pirate synergy too, as you can buff it with Swashbuckler Zombie if he hurts the plant hero, or use Captain Flameface for

However, Monkey Smuggler's ability can backfire, as while it is easier to block a strong attack, your opponent can force it with a weak one.

Bullseye plants and anti-gravestone cards are also a problem since they can ignore the Super-Nlock Meter or even just remove Monkey Smuggler outright. The ability is also more or less meaningless if your opponent's block meters have been depleted, although this shouldn't matter much due to his nature as an early-game play.

While Monkey Smuggler is only a minor nuisance, its ability can be troublesome as it can mess with your block timing, leaving you more vulnerable to attacks you want to block. It is best to remove it before it gets revealed, but only

Guardian heroes, preferably Citron and Beta-Carrotina, have the means to do so normally.

Ability aside, it is also not recommended to keep Monkey Smuggler alive for long, as your opponent can play Unthawed Viking on it, wreaking further havoc. 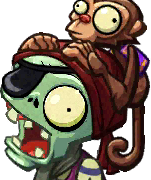 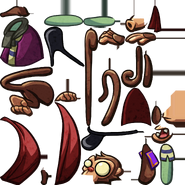 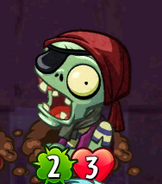 Monkey Smuggler without its monkey

Possessed being used on Monkey Smuggler

Shamrocket being used on Monkey Smuggler

Overshoot attack in Moon Base Z

Monkey Smuggler with a star icon on its strength