I need my TIME MACHINE!
Monk Flower is a conjectural name for this article.
If you know the official name or have a better name or
translation for it, please contact a wiki administrator to change it.

Level 5-1
Monk Flower (唐僧向日葵; pinyin: tángsēng xiàngrìkuí) was a plant in Plants vs. Zombies: Journey to the West. It is one of the Hero Plants. It produces 2 sun at a time, similarly to Twin Sunflower, but at a faster rate (5 seconds). Once it is upgraded enough to activate its bonus abilities, the first zombie that bites it will become hypnotized (with an exception of bosses), and it absorbs 40 bites. It cannot heal itself. Its special skill is to temporarily stun all zombies on screen. It can be moved anywhere, even above water.

It is based on a Sunflower and Tang Sanzang, the central character of Journey to the West, a Chinese monk who is tasked with traveling to India to receive a collection of ancient Buddhist scriptures to aid in the task of spreading Buddhism in his native land.

Tang Sanzang himself is based on real-life historical monk Xuanzang who himself traveled to India and documented his journey in the Great Tang Records on the Western Regions, a Chinese text that would serve as the inspiration to Journey to the West. 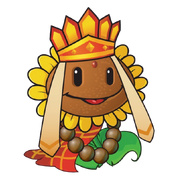 Retrieved from "https://plantsvszombies.fandom.com/wiki/Monk_Flower?oldid=2351255"
Community content is available under CC-BY-SA unless otherwise noted.