It usually contains five gold coins ($250). These bags are only found when the player is completing a game mode a second time, since the trophy or the seed packets have already been collected.

Each money bag is worth:

These bags are very similar to the first game. However, in this game, the money bag is packed with five silver coins that are all together worth 50 coins.

In the Chinese version, money bags have ten golden coins instead, a sum total of 1000 coins, and can also drop small money bags worth 500 coins from zombies, this only found by killing certain Treasure Yetis or Gargantuars from Daily Challenge in Yeti Runaway and Gargantuar Crisis respectively.

In Vasebreaker, once you complete a level for the first time, the money bag given has 20 silver coins, 200 coins in all.

Winning a money bag in a Night level

A money bag in Survival: Day 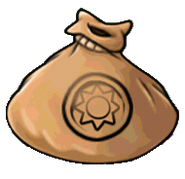 Money bag in the iOS version

A money bag being dropped by a Zomboni 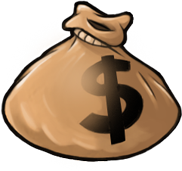 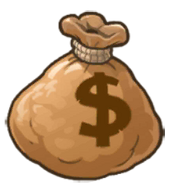 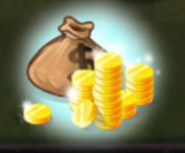 Getting a money bag as a prize

Another sentence after getting the money bag

A random sentence after getting a money bag

The money bag's location since the 3.6 update