Plants vs. Zombies Wiki
Register
Don't have an account?
Sign In
Advertisement
in: Items, Consumables, Money,
and 7 more
English

For other uses, see Coins (disambiguation).

Money is used to purchase various items in Plants vs. Zombies games. In most cases, money will drop under certain conditions, and the player must click on it, move the cursor over it, tap on it, have a Gold Magnet collect it to obtain it, or, in the PlayStation Vita version of Plants vs. Zombies, tilt the console, although it will sometimes be automatically added to the bank.

In Plants vs. Zombies 2, they are used to purchase in-game items like Power Ups and Plant Food, as well as to upgrade plants and to replay lost Piñata Parties. Sometimes, a pinata may appear in the store for 5000 coins, in exchange for obtaining 15 or 20 plant seed packets. Community Challenge Rewards are also bought with coins.

The player cannot have more than $999,990 on most versions; once that amount is reached, all money collected won't affect their total. On the iOS and Android versions of the original game, it is possible to earn up to $9,000,000.

The sound when the player picks up a coin.

Getting a coin for a remaining Lawn Mower

There is one currency system in Plants vs. Zombies, and there are four items which contribute to the player's total money.

A diamond in the DS version

In Plants vs. Zombies 2, there are two types of currency.

Coins are harder to obtain in Plants vs. Zombies 2, as the only plant in Zen Garden that awards coins is Marigold (500 per plant), and completing levels give less coins (50, +10 for each lawn mower). Coins are also a lot more useful, since they can be used for power-ups, piñatas (some), upgrading plants (and those cost a lot) and costumes. You can watch several ads every day to obtain 500 coins for each(700 during Feastivus). This also applies to gems (3) and gauntlets (1).

There is also a different currency called gems which can be used to buy boosts for the plants, certain premium plants, piñatas, Costumes, extra pots for sprouts in the Zen Garden, and the sprouts themselves. 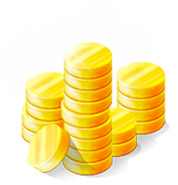 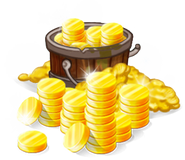 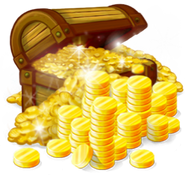 Coin packs in the store

Gem packs in the store

Ad for coins in the Coins section

The available gem packs when buying gems from the world map

Getting coins from a Mystery Gift Box

Getting 17500 coins from Arena. Notice how few coins are displayed in the picture.

Bundles in the store (Luck O' the Zombie) 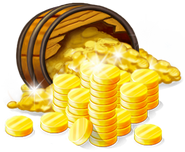 On iOS and Android versions of the games, there are purchasable amounts of coins that add the desired amount to that device. The price in real-world money goes up depending on the in-game amount.

In Plants vs. Zombies, they can only be purchased once, but they can be restored on another user profile or Apple or Android device that is hooked up to the same iTunes or Google Play account. The options for buying are:

In Plants vs. Zombies 2, they can be purchased as many times as the player wishes, but it costs them additional money each time. They only add the coins to the current user profile.

Money can be earned in several ways in Plants vs. Zombies:

In the game, if the player does not have enough money to get something, it says to get more by killing zombies.

Coins can be obtained in any of the following ways:

Zombucks can be found in any of the following ways:

Coins can be earned by:

Available in both international and Chinese versions

Only available in the international version

Only available in Chinese version  (China only)