When played: Each other Plant transforms into a random Plant that costs 1

more.
"And you thought spinach made you strong. Please. I am spinach times infinity."
Molekale is a galactic legendary plant card in Plants vs. Zombies Heroes and a member of the

It does not have any traits, and its ability transforms every plant on the field, excluding it, into another random plant that costs 1

more when it is played. This ability does not apply to Cornucopia as no plants cost more than it.

It is based on kale, a type of vegetable with green or purple leaves that was cultivated from the wild cabbage (Brassica oleracea); and a molecule, an elementally neutral group of two or more atoms held together by chemical bonds.

Its name is a portmanteau of "molecule," referring to the orbs rotating around it; and "kale," the real-life plant it is based on.

Its description may be a vague reference to Popeye the Sailor, who gains physical strength after consuming spinach.

"And you thought spinach made you strong. Please. I am spinach times infinity."

This plant has underwhelming stats for his cost, but can be a potential game-changer, allowing you to have useful plants such as Body-Gourd or powerful plants such as The Great Zucchini and Grapes of Wrath. However, it could also give you plants that don't synergize well with your deck, such as Briar Rose in a non-flower deck. But either way, since each plant transformed will usually turn out to be more powerful, it will force your opponent to think more defensively. Since non-environmental boosts do not carry over transformations, it is a good idea to have some just in case.

A good way to use it is to play it after you have set up many Pineclones or Snake Grass. This will guarantee that all your plants become 5-sun plants, resulting in many plants that threaten your opponent. They will also be more resistant to Supernova Gargantuar and Extinction Event, as each plant will transform into something different, rendering their abilities useless. A similar strategy can be done with Cornucopia, although it is much more costly and may be less effective due to the fact that its ability can make plants that cost less than 4

, lowering the effectiveness of Molekale's ability.

Also, keep in mind that The Great Zucchini is the only 9 sun plant, and Cornucopia is the only 10 sun one, with none costing more. It is therefore possible to abuse this by playing and protecting 8-cost plants at all costs until you get to play Molekale, which will cheaply weaken all zombies.

, and everything else into plants that cost 2

Statwise, Molekale is not very threatening, so it is best to focus on other plants. You can also weaken the impact of its ability by destroying most of your opponent's plants before they can play this. Unless you are going to win, do not Bounce this plant unless all the other powerful ones have been dealt with first. Otherwise, your opponent can replay this to have even more dangerous plants, if possible. 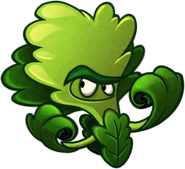 HD Molekale without its orbs 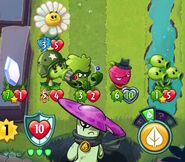 The result of Molekale's ability

Two Molekales on a lane due to Pair Pearadise's ability