Eight (at the start, more may be summoned via

Same as before
Modern Day - Day 9 is the ninth level of Modern Day in Plants vs. Zombies 2. It is a Locked and Loaded level. Frostbite Caves portals are first introduced here. After completing this level, the player receives a money bag.

Penny: My sensors are picking up increased helium levels, User Dave. I suspect we may be facing one or more balloon zombies.

Crazy Dave: I hate one or more balloon zombies!

There are two aspects that make this level very hard. On one hand, since the player lacks powerful offensive plants, Balloon Zombies, with their high speed and health, will easily fly over the player's defenses. On the other hand, the combination of Explorer Zombies, Punk Zombies, and Tomb Raiser Zombies, with tombstones giving them protection, are deadly. Ra Zombies, however, are of no concern, as the plants are extremely cheap, and the player could probably have over 500 sun by the time they show up. Thyme Warp is given in this level; however, it can actually be a detriment, because it will group up every zombie and regenerate their health upon respawning them, making individual zombies harder to hit and will eat plants with ease.

The core idea to win this level is to plant as many Nightshades as possible to generate enough offensive power. The player does not need to plant many Moonflowers, since all of the plants in this level are cheap. More space should be saved for Nightshades, with separated Moonflowers to power them up. The Plant Food is suggested to be used on the Nightshades in the back most column, and Grave Buster need to be continuously used to remove high-threatening tombstones. And finally, use Thyme Warp as a life saver when the situation gets really tough, but do not use it too early, given its very slow recharge speed.

The player should also watch out for the Frostbite Caves portal, as it can bring out Weasel Hoarders, and they cannot be dealt easily with Nightshade due to its lack of area of effect and slow attacking speed.

If you are a quick thinker and have reasonable reflexes with this game, try digging up leafless Nightshades and replacing them with new Nightshades, so the extra ammunition is available straight away. Try this strategy given you end up with a lot of Nightshades and plenty of sun. 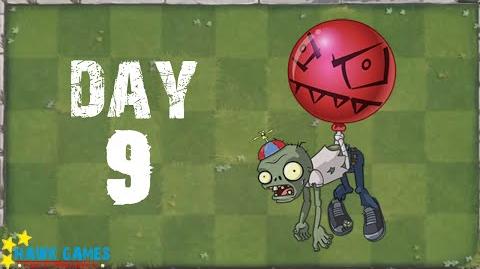 Retrieved from "https://plantsvszombies.fandom.com/wiki/Modern_Day_-_Day_9?oldid=2350707"
Community content is available under CC-BY-SA unless otherwise noted.