A money bag
Modern Day - Day 7 is the seventh level of Modern Day in Plants vs. Zombies 2. This level features portals from Dark Ages. When this level is finished for the first time, the player receives a Modern Day Piñata.

This level starts out extremely fast, as fast as the first flag appearing almost immediately. Early sun production (Gold Bloom) and an early defense are highly suggested. In addition, the Breakdancer Zombie appears yet again, and in early packs too. Octo Zombies are among the biggest threat, as they appear very early in the level, which could end up with many plants bound up in octopi. The key to beating this level is to build off of a small defense into a larger one. The player can use Moonflower and Magnifying Grass plus stalling plants to take care of the octopi and early zombies. Like Day 6, do not bring plants that shoot out projectiles, the Dark Ages portal appears yet again, and the Jester Zombies spawned can cause the same troubles by deflecting them back to the plants, damaging them.

This strategy does not require premium plants. It will involve fast planting however.

An alternative strategy, which does not require lawnmowers, premium plants, and plant food. Required plants:

By SaveTheLawnMower. Primal Potato Mine will kill the Octo Zombie and octopi.

The best way to deal with octopi by ShroomstagramUser 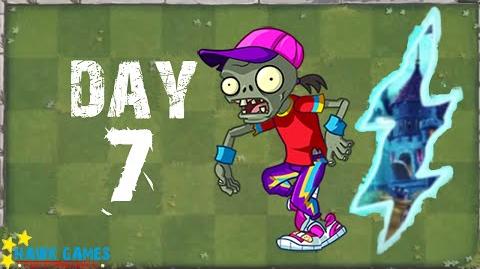 Retrieved from "https://plantsvszombies.fandom.com/wiki/Modern_Day_-_Day_7?oldid=2349653"
Community content is available under CC-BY-SA unless otherwise noted.