Produce at least 4000 sun
Modern Day - Day 6 is the sixth level of Modern Day in Plants vs. Zombies 2. There are seven Gold Tiles on the lawn. Portals from Dark Ages appear and the player is given an objective to produce 4000 sun in the level. When this level is finished for the first time, the player receives a Modern Day Piñata.

The player must produce 4000 sun in a rather quick level, with nothing but Gold Tiles to aid this goal. The amount seems lofty, but can easily be achieved by using big sun producers like Twin Sunflower. However, the player should take advantage of the Gold Tiles on the lawn. For one, if the player does not, Imp Porters can set up camp and cause some trouble for the player. Next, Wizard Zombies and Newspaper Zombie can easily slip through defenses if left unattended to.

Primal Wall-nut can easily be placed onto the sun tiles, which blocks Imp Porters from setting up camp. The player should not forget about the objective though, as it is easy to lose this level by failing the objective. Do not bring plants that use projectiles, as when the Dark Ages portal appears, Jester Zombies will send them back. If the player's offensive plants all shoot projectiles, the only way to win is to stall him to kill him with the lawn mower or to use Power Ups. If the player couldn't achieve the goal after the final wave, one could try not destroying the camps produced by Imp Porters to prolong the level, allowing the player to obtain sun from sun producers.

Plant a lot of Moonflowers and Nightshades. Primal Wall-nut and Chard Guard for defense. Put Spikeweeds and Spikerock to counter Wizard Zombies and kill very slowly or you can get overwhelmed. Cherry Bomb is for emergencies. No Plant Food needed.

By Nikon1803
Add a photo to this gallery 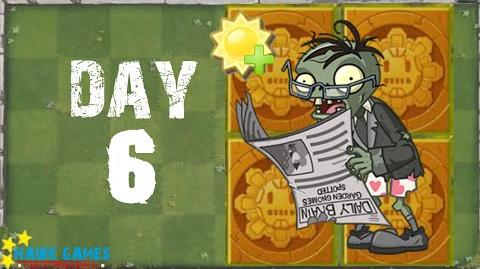 Retrieved from "https://plantsvszombies.fandom.com/wiki/Modern_Day_-_Day_6?oldid=2349652"
Community content is available under CC-BY-SA unless otherwise noted.