The player can immediately lose right from the beginning due to the Balloon Zombie. This is the most dangerous zombie because of his fast speed, good amount of health, and lack of plants to deal with him. Because of the absence of lawn mowers, this zombie can able to pass through your defenses easily. The best plant though, is the Chomper. Try placing Chompers on the last column so tougher zombies like Buckethead Zombies won't overwhelm them. Moonflowers are very important, and 3 are given, so place them in the back in the top, middle, and bottom lanes. Shadow-shroom's Plant Food effect is very effective at taking out any recently spawned group of zombies. Dusk Lobber and Fume-shroom are the basic attacking plants for this level, along with Nightshade. Fume-shroom will have to be used against Jester Zombies, or alternatively Spikeweed, Shadow-shroom, or Chomper. The Zombot Tomorrow-tron can also send out Gargantuars, so be careful of that. The Zombot's main attacks are spawning zombies, rushing into 2 lanes killing any plant, and shooting a plant with a rocket. Save some Plant Food to avoid some of these attacks. After the first section, the Zombot starts summoning zombies from other worlds, which have either good health, good abilities, or simply negate some plants. Use every plant given effectively to get rid of these crowds.

What a good layout should be as follows:

However, this setup will require a lot of repairing and if a zombie such as an enraged Newspaper Zombie or Sunday Edition Zombie breaks through this defense, use Shadow-shroom on it and/or stall it with Stallia. At the beginning of the level, you should use Nightshades and Chompers to defeat any Balloon Zombie that attempts to fly above your defenses. Survive the early onslaught and get this defense built and you should be able to defeat Dr. Zomboss once and for all.

For this strategy, you might have to retry a few times to ensure a proper defense is secured. However, here's the general line-up:

Chompers are placed in the back to counter straying Balloon Zombies or Newspaper/Sunday Editions from eating an entire lane down. This defense is a bit tricky to set up, but careful planning can make it work. In addition, a risky strategy is allowing the Zombot to ram 2 lanes so that the zombies there can be killed by the Zombot. In addition, save Shadow-shrooms for its Plant Food effect, which will easily take care of most zombies.

Use Shadow-shrooms when they are boosted to take out all zombies exept for Jurrastic Bully, gargantuar variants and the All-starChomper can kill the formers in one bite while you only have to worry about the latters. Also, since the All-star is very quick, let it tackle a shadow-shroom before chompers can bite it.

Beaten by Repeater91012
Add a photo to this gallery 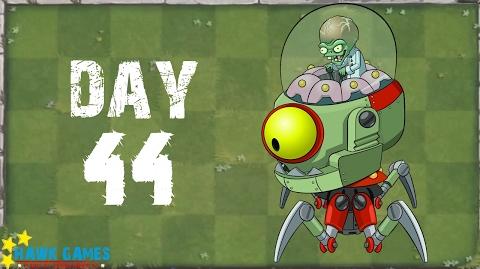 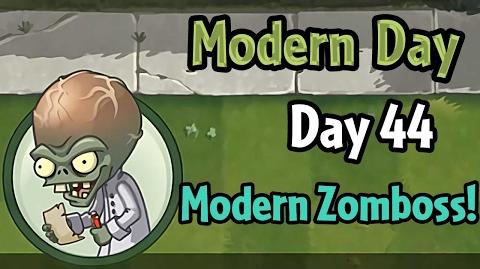 Retrieved from "https://plantsvszombies.fandom.com/wiki/Modern_Day_-_Day_44?oldid=2370886"
Community content is available under CC-BY-SA unless otherwise noted.