Like Modern Day - Day 12, do not take the objective for granted. The combination of tough zombies, Jester Zombies, Boombox Zombies, and the addition of a Gargantuar Prime at the end makes this level tricky. Be careful on when to use plants that will be lost like Cherry Bomb. In addition, bring Area of Effect plants like Snapdragon to deal with Jester Zombies, which appear as soon as the first zombie. Magnifying Grass is also a good choice, as it can deal with tough zombies and effectively get rid of the Gargantuar Prime at the end.

Note: Due to Electric Blueberry being the most important one, results may vary, but the higher level the Laser Bean the better.

Start by placing Gold Bloom immediately, and place Primal Sunflowers starting in the second column until the zombies after the first Jester Zombie arrive. Place the first Magnifying Grass in the first column to kill the Jester. Whenever a zombie gets too close for comfort, kill it with a magnifying grass. You will not require Plant Food, but feel free to use it to kill some of the tougher enemies. 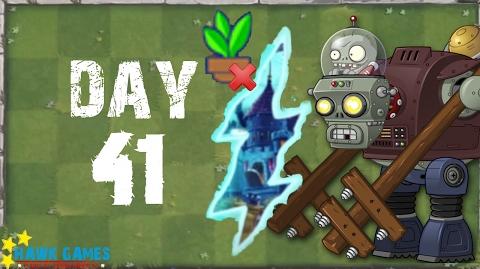 Retrieved from "https://plantsvszombies.fandom.com/wiki/Modern_Day_-_Day_41?oldid=2350171"
Community content is available under CC-BY-SA unless otherwise noted.