Same as before
Prior to the 7.4 update, Modern Day - Day 40 was the 40th day of Modern Day. Upon completing the level, the player receives a money bag.

The level is comprised of mainly Explorer and Torchlight Zombies, Ancient Egypt Portals, Excavator Zombies, and Newspaper Zombies. Heavy artillery should be used to defeat massive hordes in this level. Ice plants are also a good option, since they can make Explorer and Torchlight Zombie less of a threat. As shown on the dialogue and like Ancient Egypt - Day 31 onwards, there are no lawn mowers to save lanes, so make sure to not let a single zombie pass through defenses.

This very simple strategy is made with the goal to be as compact as possible to avoid plants getting tossed around by portals. Unfortunately, it uses many premium plants, so it might not be an option for a lot of people.

By Xadda Xadda No lawn mowers = no easy win! :(
Add a photo to this gallery 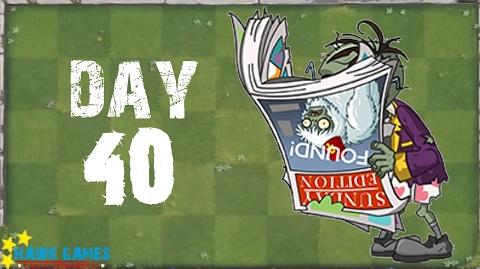 Retrieved from "https://plantsvszombies.fandom.com/wiki/Modern_Day_-_Day_40?oldid=2350170"
Community content is available under CC-BY-SA unless otherwise noted.