A money bag
Modern Day - Day 4 is the fourth level of Modern Day in Plants vs. Zombies 2. Imp variants from all seven worlds added in subsequent updates appear here. Like the previous level, portals do not appear here. When this level is finished for the first time, the player unlocks Nightshade.

This level consists of every Imp except the ones from the first three worlds. Like other worlds, the Imps cause an early ambush at the beginning of the level. The player needs to quickly deal with the early attack. Puff-shroom is a good choice, as it is free and allows the player to maintain sun production. However, there are many Glitter Zombies that protect the numerous amounts of Imps and zombies. The player should not bring fire plants, as the Imp Dragon Zombie appears, which negates all fire attacks. Luckily, the player does not need to worry about any portals spawning.

First, start placing Moonflowers in 2x2 squares in column 1 and 2 to get sun. At the same time plant Puff-shrooms in lanes 1, 3 and 4 on columns 5 and 6. You should be able to defend yourself, use cherry bomb if needed. Continue placing Moonflowers during this time until column 1 and 2 are filled. When the first flag comes, put a Winter Melon in lane 4 column 3, that can take out most of the imps on lane 5. Continue doing this, and if the zombies gets close to Melons/Moonflowers, ALWAYS have a Spring Bean ready with Plant Food. After you have fed it with Plant Food, use Blover immediately. If you do not have Plant Food, just use a Cherry Bomb. When the Bug Bot Imps come, use E.M.Peach to stun them or they can make you lose. Continue placing Winter Melons, first in lane 2, then 3, and then 5 or 1, you decide. For the final wave, if you have a Plant Food, just use it on Spring Bean when all zombies have entered to instantly win. Use Blover. Otherwise, Cherry Bomb the Gargantuar, remove Moonflowers behind Winter Melons on lane 3, plant Puff-shrooms (or Winter Melons) to kill the Imp. Then just wait until Gargantuar dies. 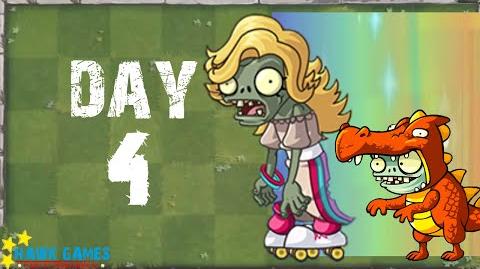 Retrieved from "https://plantsvszombies.fandom.com/wiki/Modern_Day_-_Day_4?oldid=2349648"
Community content is available under CC-BY-SA unless otherwise noted.